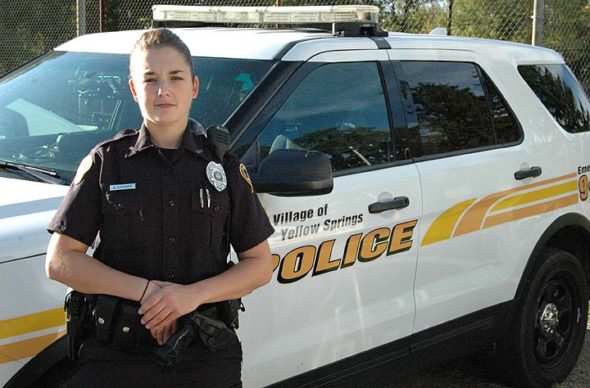 Allison Saurber, 22, is the newest officer in the Yellow Springs Police Department, following her hiring about a month ago.

The Yellow Springs Police Department has added a new officer, Allison Saurber, 22, to its fulltime ranks. Saurber comes to Yellow Springs after working for a year at the Butler County jail. Before that, she graduated from the police academy.

Because she hasn’t previously worked as a patrol officer, Saurber is currently shadowing other local officers to learn the ropes of the job. Currently, she is learning from Dave Meister and previously, she spent several weeks in the company of RJ Hawley. She’s worked both day and night shifts, and currently works from 5 p.m. to 3 a.m.

Before Saurber came on the job, the department was down three officers, following the departures of Tom Sexton, Jessica (Frazier) Kessel and John Whittemore.

While she’s just beginning to interact with villagers, Saurber is eager to see herself as part of the community.

“Instead of the big, mean police officer, I want to be the kind of individual people want to see, like a resource to the community,” she said in a recent interview.

Saurber lives in Butler County. For a more extended story about the department’s newest officer, see the Oct. 13 News.