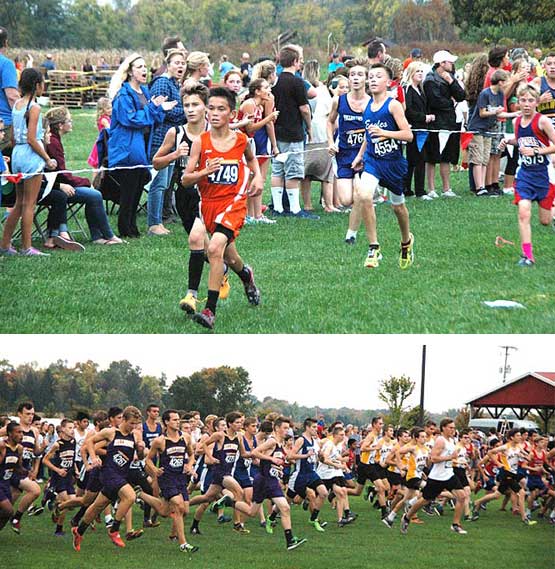 above: McKinney Middle School runner Pete Freeman (4749) ran the two-mile race as part of last week’s Yellow Springs Invitational, hosted by Young’s Dairy. The McKinney Middle School and YSHS cross-country team also took part in the meet, running boys’ and girls’ 5Ks. Freeman finished with a time of 13:18. Below: The YSHS boys Bulldogs ran among the pack of hundreds of other runners in the Yellow Springs Invitational. Over 35 schools competed in the meet, with hundreds of runners per race. (photos by Dylan Taylor-Lehman)

Cross-Country
For anyone who hasn’t been to a cross-country meet, they are vast, sprawling affairs. The distances runners run are measured in miles, so the courses are necessarily long, often winding in and out and around the host property in order to make up the length of the races. Young’s Dairy was transformed into a runner’s paradise last week, when 35 schools gathered for the Yellow Springs Invitational on Oct. 18. Schools staked out areas to set up tents and stash their gear, and troops of runners ran in packs to warm up for the event.

The meet only featured four events: the middle school boys’ and girls’ two-mile races and high school boys’ and girls’ 5K. But each race took around 45 minutes, from getting all of the hundreds of runners ready at the starting line to the last runners crossing the finish line. The runners usually finish from 16 to 32 minutes in the 5K, explained senior Levi Brown, a runner at YSHS. The middle school boys’ race was first. The runners appeared to abide by the same rules as traffic — clusters of runners ran together, with a handful of single runners in-between.

Pete Freeman, an eighth grader at McKinney Middle School, said the Yellow Springs Invitational was the first home meet of the season and the last meet for the middle schoolers. He said it felt good to run somewhere familiar, and the cheers of his friends who came to watch him run enhanced his performance. Their encouragement helped, he said, but so did his own drive.

“I hate disappointing people,” he said.

Zach Lugo, a sophomore at YSHS, said the Young’s Dairy course was a “fast course” as cross-country runs go, owing to the lack of hills. Not only is the course flat, but runners are at their peak at the end of the season, which leads to many runners making their personal bests (abbreviated PR, for personal record) at the meet.

Lugo said he, like many people on the team, couldn’t run a mile when he first joined the team, but now he routinely runs seven or eight miles at a time. He started running in middle school, when a friend of his brother told him he was joining the team, end of story. Running is both the easiest and the hardest sport, he said.

“It’s just running,” Lugo said. “But then again, it’s also just running.”
The results for the Young’s Invitational and the district meet, which took place on Oct. 22, are below. Some injuries at the end of the season meant that not everyone ran both meets.

And with that, the fall sports season draws to a close. Winter will bring competition anew, with the chill in the air reflecting the ice in the athletes’ veins!