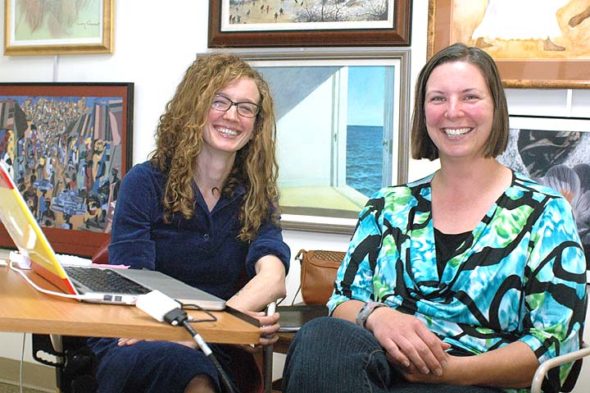 Lauren Craig, left, and Laura Skidmore are two members of the Yellow Springs organizing team of Mothers Out Front, a national grassroots nonprofit seeking a “livable climate” for future generations. Meetings of the local team, started by Skidmore this spring, have drawn about 13 area women. All mothers, grandmothers and women with children in their lives are invited to join with the local group’s advocacy of renewable energy and other climate-friendly solutions. (Photo by Audrey Hackett)

Moms Out Front for a livable climate

A group of seven women met with Rep. Rick Perales at his “unofficial office” at Panera in Beavercreek last Friday. The women — joined by two girls, a daughter and granddaughter of two of the women in attendance — were there to talk with Perales about a bill that would extend a freeze on existing renewable energy and energy efficiency standards for utility providers in Ohio. That bill, put forward by Republican state lawmakers this spring, is expected to come up for vote after the November elections.

Laura Skidmore opened the meeting by showing Perales a photograph of her daughters, Charlotte, 2, and Gabriella, 10. “That’s what I’m here for,” she said.

For an hour, the women spoke to Perales about their hopes and fears around Ohio’s energy future. “We have to shift from fossil fuels to renewables,” said Kendra Cipollini, a biology professor at Wilmington College. The bill that could soon be up for vote would delay Ohio in making that shift, the women believed.

“The longer we wait to move ahead on this the more we get behind,” Skidmore said.

Perales agreed to consider the women’s perspectives and review the information they’d provided. And he urged them to attend hearings on the bill. Several indicated they would.

The women are part of Mothers Out Front, a national grassroots group whose Yellow Springs team was started last spring by Skidmore, who lives just outside the village. Most are from Yellow Springs, and most are mothers or grandmothers of young children — roles that give added urgency to their concerns over climate change and the environment.

The national group was founded by two mothers in the Boston area in 2013. According to the group’s “Declaration of Protection for Our Children against Climate Change,” participating women seek a “swift and complete transition to clean energy” in order to reduce the effects of climate change on future generations. Over the past several years, the nonprofit has grown to include 20 community teams involving 3,000 women in five states. The Yellow Springs team is the first in Ohio.

About 13 local women have attended the group’s three meetings so far. Meetings are held at the public library, but are designed as “house party” gatherings, reminiscent of an earlier era’s “Tupperware parties,” according to Skidmore. They serve to introduce women to the core issues, foster camaraderie and encourage actions that women can take, individually and collectively, to reduce overall energy consumption and shift to renewable sources. The all-volunteer group is open to mothers, grandmothers and all women with children in their lives.

Skidmore said the Mothers Out Front message resonated deeply with her when she discovered the organization online last spring. She had been looking for a way to transform her fear and despair over climate change into action. Though always interested in environmental issues, Skidmore said it was the birth of her second child, Charlotte, that jolted her into a new awareness. Formerly a Spanish teacher, she stayed at home after Charlotte’s birth, witnessing each small step of her young daughter’s growth and development.

Other women in the group shared similar stories. Lauren Craig, who lives outside Clifton with her family in a passive solar home, said she experienced a shift in perspective about five years ago, when she was pregnant with her first son, now 4.

“Getting pregnant changed everything,” Craig said. “I started looking at everything with new eyes. What kind of world was I bringing my son into?”

Another member, Aimee Maruyama, is not only part of the group, but was recently hired as a grassroots fundraiser by the Mothers Out Front national office in Boston, a position she will occupy while remaining in Yellow Springs. “It’s about their future, and their health while growing,” she said, referring to her children.

According to the Mothers Out Front model, each community team defines a local goal that’s doable within about a year. In Massachusetts, for example, one team sought and won approval from its select board to build a solar farm that stands to contribute 31 percent of the electricity needed by municipal buildings and schools.

The Yellow Springs group has not yet defined its goal, but hopes to do so within the next month. Meanwhile, members have been active on issues pertinent to renewable energy, including the recent meeting with Rep. Perales, and participation in an upcoming clean energy rally at the statehouse, led by Ohio Citizen Action and scheduled for Nov. 16 from 11 a.m. to 1 p.m.

“These are things that fit well with Mothers Out Front goals,” Skidmore said.

The nonprofit’s focus on renewable energy reflects the willingness of people across the political spectrum to embrace clean energy, according to Skidmore. In Ohio, the clean energy mandates had strong bipartisan backing when they passed in 2008. The standards require power companies to sell increasing percentages of electricity from renewable sources, as well as help consumers improve their energy efficiency. But Republican lawmakers pushed through a freeze on the mandates in 2014, and the current bill would extend that freeze for another three years.

That would be a mistake, according to Dawn Johnson at the recent meeting with Rep. Perales. Johnson, a grandmother of two girls, acknowledged that utility providers and other opponents of the mandates were behemoths next to the small group of women around the table.

“We’re just a handful of moms worried about the future of these beautiful people,” she said.

Yet that is precisely the power Mothers Out Front seeks to harness, according to Skidmore. Motherhood can bridge political, cultural and social divides, she said, and the passion mothers bring to issues affecting their children’s future can lend a depth of personal conviction and public authority to their activism.

“Mothers are an underrepresented voice in the decision-making of government,” she said. “But together we’re a really powerful voice.”

Women interested in learning more about the local Mothers Out Front organizing team may contact Laura Skidmore at 937-474-2275.