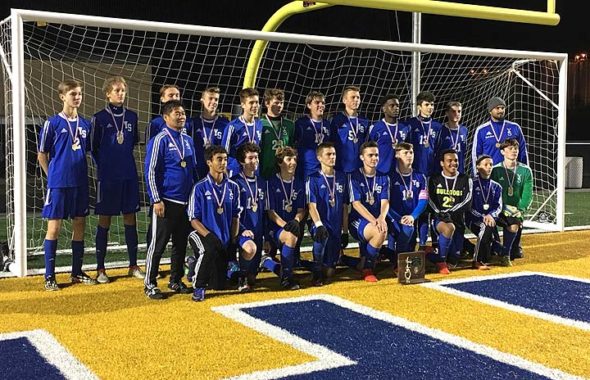 The Yellow Springs Bulldogs pose with their hard-earned district championship trophy, which they earned last week after beating conference rivals Dayton Christian 1–0. “Our boys wanted it more than them,” said coach Ben Van Ausdal. “They feel like they could beat anybody right now.”The team unlocked the next level of tournament play, and will be fighting tooth and nail this week for victory at the regional semi-finals. (Submitted photo)

The Yellow Springs High School boys soccer team has been kicking its way to the top over the past few weeks, winning tournament game after tournament game and achieving something that hasn’t happened in the previous eight seasons: winning the district championship. Last week, the Bulldogs beat conference rivals and highly-ranked Dayton Christian 1–0 at Sidney High School, winning a chance to play in the regional semi-finals. The Dayton Christian Warriors were conference champions for the last two seasons.

“I knew that we had a good team, but I didn’t know that this year was the year we’d get over the hump,” said YSHS coach Ben Van Ausdal. “The ninth time is a charm!”

To become district champions, the Bulldogs had to win four tournament games. They beat Tri-County 10–1, Milton Union 2–0, Botkins 3–0 and then Dayton Christian, who were ranked the number one team in the area and the number five team in the state.

The Warriors boasted one of the region’s best players, an all-state athlete who was voted player of the year last season. The Bulldogs went into the game vowing to fight against him, Van Ausdal said. The strategy was to contain the team and keep them from breaking away with the ball. Van Ausdal credited junior Fisher Lewis for his expert job containing the players, and sophomore goalie Dylan Rainey with his remarkable save in the last three mintues of the game. Had that goal been scored, the game would have been tied and gone into overtime. It was an amazing save, Van Ausdal said.

“I’m so glad I have two more years with him on the team,” he said.

On the offense, senior Augie Knemeyer, sophomore Teymour Fultz and senior Elliot Smithberger were credited with their masterful control of the infield. The Bulldogs kept the Warrior’s midfielders sequestered in the middle of the field, preventing the midfield-based attack that Dayton Christian is known for.

Senior Joe Plumer scored the Bulldog’s goal, the successful result of the rival’s inability to pin him down. He was double-teamed by the Dayton defense, Van Ausdal said, but was consistently able to break through their ranks.

Over all, the district championship was a good game, a physical game, Van Ausdal said.

“Our boys wanted it more than them,” he said simply. “They feel like they could beat anybody right now.”

Despite their remarkable success, the team has not gone crazy with celebration, or taken to the streets flipping over cars in victory. The focus is on how to win the next game, the regional semi-finals. The Bulldogs will play Roger Bacon High School this week, a team ranked number two in the state.

The semi-finals will certainly be a tough game, he said, “but win or lose, I’m really proud of my boys.”

The results of the regional semi-finals will be in next week’s paper.