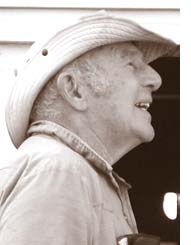 Bob was born on July 20, 1932, in Yellow Springs, the son of the late Charles “Hap” and Mildred (Mitchell) Young. Bob is survived by his son and daughter-in-law, Dan and Cathy Young; daughter and son-in-law, Debra and Lee Whittaker; grandchildren John (Kelly) Young and Robert Whittaker; great-granddaughter Scarlett Young; brothers Carl and Bill Young; and numerous nieces, nephews and friends. He was preceded in death by his beloved wife, Margaret Joan Young.

Bob graduated from Enon High School in 1950 and served as the Husted Fire Department captain for many years. He was also a member of the Yellow Springs Masonic Lodge. Along with his two brothers, Bob was a founder of Young’s Jersey Dairy, Inc. He created many lifelong relationships with his employees and customers, and considered them all his “family.” He was loved by many, and his legacy will live on by the many lives he touched.

Viewing will be held on Wednesday, Dec. 7, 10 a.m.–noon, at Jackson Lytle and Lewis Funeral Home in Yellow Springs. Graveside services will follow at Glen Forest Cemetery. In lieu of flowers, donations may be made to the Alzheimer’s Association, 31 W. Whipp Road, Dayton, OH 45459. Condolences may be expressed to his family online by visiting http://www.jacksonlytle.com.