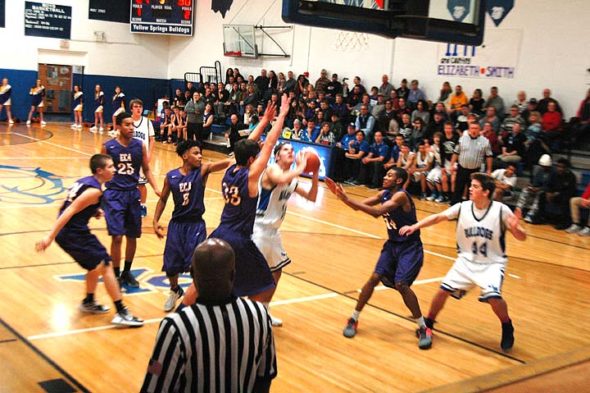 Yellow Springs Bulldog junior Tony Marineli (10) and sophomore Trey Anderson (44) fight through a phalanx of Emmanuel Christian players in the Bulldog’s game on Dec. 9. While the game ended in an excruciatingly close, 54–53 Bulldog loss, mentally, the players are in great shape, said assistant coach Phil Renfro. They are engaged and eager to learn, and play well together, he said. (Photo by Dylan Taylor-Lehman)

Yellow Springs High School’s new assistant boy’s basketball coach, Phil Renfro, is an excitable, positive guy, and one who has years’ worth of experience eating, breathing and living community basketball. Renfro was a coach at Beavercreek High School for seven years, is a volunteer coach at Wright State University and has spent at least 10 years developing youth basketball players. In short, he is the perfect addition to YSHS basketball coaching staff, as the team had to rebuild itself after five starting seniors graduated last year.

The YSHS basketball program experienced some highs and some shakeups over the past year. The Bulldogs made it to the Division IV regional finals last year after an impressive 21–7 season, but earlier this year, former coach Steve Grasso left to coach in greener pastures. Assistant coach Bob Carpenter was elevated to the esteemed coaching position, with Renfro stepping in as one of the assistant coaches.

It was a tough position to be in, as there was considerable expectation surrounding the team based on last year’s success, Renfro said. The starting seniors from last year played together for a long time and thus had great playing chemistry, he said, but this also meant that some of this year’s players didn’t get a lot of playing time. In fact, for many of this year’s roster, it’s the first time they’ve started a game.

While head coaches normally oversee the strategy of a game, assistant coaches work with the players physically. Because Carpenter and Renfro stepped up from assistant coaching positions, they are well equipped to get their players where they need to be physically.

Mentally, the players are in great shape, Renfro said. They are engaged and eager to learn, and play well together. The season so far has been colored by losses — the record is currently 0–4, which includes a 43-point loss in the first game of the season — but that comes from a team getting its bearings and not the lack of a drive to win.

The Bulldogs’ recent game against Emmanuel Christian exemplified the thrust-into-the-limelight dynamic of this year’s boys basketball team. The game got off to a slow start, but soon the Bulldogs whipped themselves into shape and were able to maintain a close score for most of the game, often coming back 10 points to tie up the score. Just as it looked like the Bulldogs might clinch the win, their eagerness to do so actually diminished their chances. A few turnovers and a few missed opportunities led to a excruciatingly close final score of 54–53.

But in Renfro’s experience, turnovers are more a result of inexperience than bad team chemistry. The team can only get better, he said, and the excitement about the progress they’ve made thus far and the genuine desire to work hard no doubt means they will.

“You wouldn’t even think they lost,” Renfro said. “They’re acting like they are 4–0.”

The YSHS girls basketball team is currently faring a little better, with a current record of 3–2. The Bulldogs unfortunately lost their game against Ansonia on Dec. 10, with a final score of 54–48, but they utterly crushed Jefferson Township on Dec. 8, 78–32. More coverage of girls basketball forthcoming!