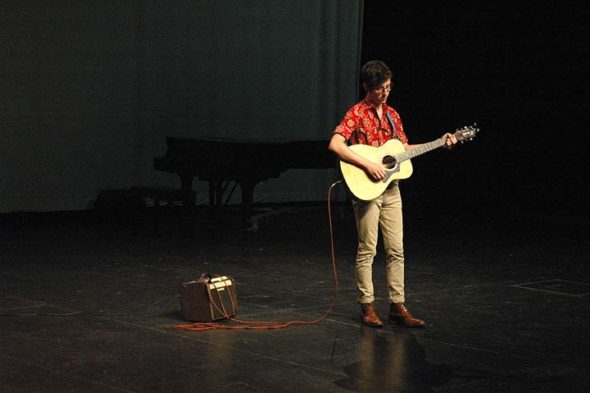 The annual holiday concert of staff and campers of Friends Music Camp will take place Friday, Dec. 30, at 7:30 p.m. at the Foundry Theater on the Antioch campus. Staff members and professional musicians Wendy Champney Enderle and Martha Hyde will perform, along with cellist Chiara Enderle, violinist Mathias Enderle and former campers Sam Salazar and Rory Papania, among others. The event raises money for camper scholarships. Shown above, Papania performed at the group’s 2016 summer benefit, which also took place in Yellow Springs. (News archive photo by Matt Minde)

As the year comes to a close, an event that has become a tradition of the winter holiday season in Yellow Springs looks ahead as well to the warmth of summer and the tradition of summer camp, specifically Friends Music Camp, or FMC.

The annual FMC Scholarship Concert will be Friday, Dec. 30, beginning at 7:30 p.m. at the Foundry Theater on the Antioch College campus. The event, which had its beginnings about five years after FMC’s 1980 founding by villagers Peg Champney and the late Jean Putnam, raises money to help pay tuition costs for the month-long residential camp.

“All money goes to scholarships,” said Champney, who after many years as camp director now serves in an emerita role, with the camp leadership being shared by longtime staffers Nick Hutchinson, a Chicago-based pianist, and Drea Gallaga, a Chicago-area educator who began her affiliation with FMC as a 12-year-old camper.

Champney, who is also bookkeeper for Yellow Springs News, said that concert-goers are asked to pay what they can, though the suggested cost at the door is $15.

“And more would be appreciated,” she added. Camper parent Jennifer Berman (married to YS News co-owner Matt Minde) is also organizing a sale of baked goods and other items at the concert to further benefit the cause. Additional donation checks can also be sent to Champney in care of the News office. (In the effort of full disclosure, this reporter is a parent of three past FMC campers.)

Founded on Quaker principles, including equality, simplicity and integrity, FMC welcomes campers, ages 10–18, of any and no religious affiliation. Unlike many music camp experiences, FMC offers a noncompetitive environment where prospective campers are asked only to have had a year of study in a chosen instrument or voice. Orchestra, jazz and concert band, choir, musical theater and individual instruction are all available, along with ensembles and combos that arise out of camper interest. The 2017 camp dates are July 9–Aug. 6, with a two-week option July 9–23 for 10–12 year olds. The 2017 tuition will be $2,705 for four weeks, substantially less than most month-long residential music camps, but still substantial. Thus the need for scholarships. Camp leaders say they do not want cost to be the thing that keeps a young person from attending.

Long-time staff member Lisa Liske-Doorandish, who has taught cello at FMC for 22 years, has organized the annual scholarship concert for the past several years.

“We always seem to have a cross-section of current staff and former staff, and in recent years we’ve also had some campers,” she said. “It’s a nice collaboration to have all of these elements of the broader community.”

Participants in the program Dec. 30 include Wendy (Champney) Enderle, a classical violist who grew up in Yellow Springs and served on FMC staff for many years; her husband, Mathias Enderle, a classical violinist; and their daughter, Chiara Enderle, a classical cellist who performed as a guest artist with the Springfield Symphony Orchestra last season; multi-instrumentalist Martha Hyde, a long-time FMC staffer who also grew up in Yellow Springs and is a professional musician in New York City; and former campers Sam Salazar and Roarke Papania, who founded the local alt-bluegrass band Wheels while they were in high school.

Works on the program will include a musical setting of poetry by Paul Laurence Dunbar composed by Martha Hyde; a variety of chamber ensemble pieces featuring a range of eras and instrumentations; a Bach cantata vocal solo; and a meditative composition.

Also “lending his own contribution to the program” will be locally based classical pianist Sam Reich, who doesn’t have an FMC affiliation, but supports the cause.

The camp underwent a major transition last year in moving from its founding home at Olney Friends School in Barnesville, Ohio, to the campus of Earlham College in Richmond, Ind. Any such move is not without difficulty, and the camp experienced a loss in attendance numbers from about 75 to about 50 last summer. Now that the move has been completed, however, Liske-Doorandish said the camp leadership hopes to build on positive aspects of the new location.

Primary to that is “the great, wonderful performance space we have now,” she said. “Everyone was inspired by the performance facilities — and I will add to that, by the air conditioning as well,” she said with a laugh. The Olney campus is without air conditioning, which beyond the physical discomfort of campers and staff, detrimentally affected the state and tuning of pianos and other instruments.
The new home is also more geographically accessible, she said, noting that the closer proximity to an airport and other major forms of transportation is anticipated to be a plus in attracting campers from other locales.

“The space itself inspired students to listen to the sound in a new way. The hall became part of the instrument. It was very powerful. There was a new level of listening.”