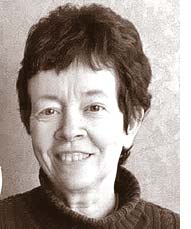 Kathleen (Kathy) Scott Monaghan passed away on Nov. 21, 2016, at Hospice of Dayton, after a courageous, year-long battle with cancer. Kathy was born in New York City to Frederick and Margaret Scott on Oct. 10, 1946, and was the oldest of four sisters. As a youngster she had a short modeling career as the Ivory Snow Baby of 1946 and numerous magazine and TV commercials.

Not only was Kathy one of very few women in mathematics at UD but she reinvented herself many times over during her busy and fulfilling life. She had an amazing brain and intellect that showed that she could accomplish any goal that she set her mind to. No career, nor aspiration, seemed outlandish nor out of her capacity. She exemplified an expression that she loved, “age is only a number,” and to her nothing was ever too late.

Putting her education and love of children to use, Kathy was trained and certified as a Montessori teacher and worked in the Yellow Springs Montessori Nature School. She raised three children, and after they graduated from the Montessori school, she home schooled them until they moved on to traditional schools.

Her self-reinvention never stopped and as an aspiring entrepreneur, her husband and she created and developed PaKa Enterprises, a business development, management and consulting firm which has been operating for over 47 years. Putting her business acumen to use, she managed The Emporium Wine Store in Yellow Springs and, with her husband, created The Yellow Springs Baking Company, an area pioneer in authentic San Francisco sourdough and artisan breads.

Kathy would always try to point out any sliver of a silver lining even on the cloudiest of days and was lovingly called “Pollyanna” and “Mary Poppins” by her family. She had a card taped to the wall by her desk that expressed how she liked to view her world and live her life: “Barn’s burnt down … now I can see the moon” (Masahide). She read this every morning while watching the beautiful finches at the feeder she faithfully kept filled. Aside from seeking out the positives in life, she balanced this by being a straight talker who many relied upon for her no-frills clear wisdom and advice.

During the more “seasoned” years of her life, she was a dedicated grandmother who loved to be as much a part of her grandchildren’s lives as possible. You could often find her at the soccer fields, wearing a giant parka and huddling under a big blanket, cheering on one, or several, of her grandkids.

An avid reader and researcher, she devoured (mainly) non-fictional books and easily read and deciphered the most difficult of research papers. If you had a health problem, she probably already had a deep knowledge of it, or she soon would. Back before the relative ease of internet searches, you could find her at Wright State University’s medical library locating the most up-to-date research on a friend’s or family member’s ailment. She was always there for anyone who needed her.

She never gave up.

Always a high-energy physical fitness and yoga buff, she sold the YS Baking Company after 11 years, and became a certified personal trainer with clients at LA Fitness and Wright-Patterson Air Force Base. Simultaneously during this period she became a belly dancer, joined a Dayton Troupe and performed throughout the greater Miami Valley on numerous occasions (in her late 50s and 60s!). She was also an accomplished and enthusiastic gardener who took pride in her vegetables and flowers.

A celebration of Kathy’s life will be held at a later date during the springtime of 2017, with arrangements to be announced. Monetary donations in her memory may be made to The Hospice of Dayton. Daily acts of loving kindness and paying-it-forward would be fitting and deeply appreciated.

One Response to “Kathleen Scott Monaghan”