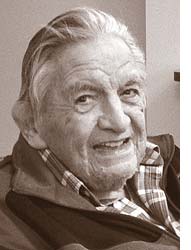 Lieutenant Colonel Richard H. Gomez, USAF, Retired, age 89, peacefully passed away on Tuesday, Nov. 22 at Elmcroft Senior Living. He was surrounded by his family. Richard leaves behind his wife of 60 years, Juana McKenna Gomez, “Jennie”; eldest daughter Georgiana and her spouse, Julie Jenkins, and grandchildren Valerie, George and Vanna; second daughter Adriana Thomas, her husband, Jeffery, and granddaughters Tessa and Tiana; eldest son Richard Gabriel Gomez; second son Bertrand G. Gomez; and youngest daughter Marcella Gomez and her partner Michael Thomas. Richard is also survived by his older brother, Gilbert Gomez, and younger sister, Alicia Jure, and their extended families; his Aunt Aurora and her family; Aunt Alejandra and many, many cousins in Topeka, Kan.; as well as the McKenna side of the family in California and Oregon.

Richard was born Dec. 6, 1926, in Topeka, Kan., to John and Dolores Gomez, and was one of four children. His family moved to California in 1939 so that his father could find work in a better climate and to help his children have better opportunities. Richard graduated from St. Anthony’s High School in Long Beach, Calif., and was 10th in his class.

He joined the Navy at 17, during WWII, with dreams of being a fighter pilot. Although he was one of five to pass the V5 Fighter Pilot Program, he was told that they were not taking any more recruits. Richard became a turret gunner on the plane he had hoped he would fly as a pilot. Upon completing his service in the Navy, Richard went to study with the Jesuits at Loyola University in Los Angeles on the GI Bill. He majored in business administration with a minor in philosophy. He was an active member of the Glee Club, because he loved to sing, and was in the ROTC.

After graduation, he worked in the aerospace industry as an accountant. When the Vietnam war broke out, he heeded the call by John F. Kennedy and re-enlisted as an officer in the United States Air Force. His tours of duty took him and his family to Okinawa, Rome, New York and Wright-Patterson AFB in Dayton. He retired in 1978, and the family settled in San Pedro, Calif. Because Richard had five children who were either in high school or just starting college, he worked in the aerospace industry once again for TRW, Northrup and Aerojet.

Richard loved reading. His favorite genres were political biographies and the theological writings of Thomas Merton and philosophical writings of Pierre Teilhard de Chardin. Richard was a life long member of the Otters — a group of Loyola friends that lived together in a beach house in Marina del Rey while attending college. They used to meet every now and then after they graduated in 1952. As they are all aging now, an occasional phone call or letter keeps their friendship alive.

Richard led a very prayerful life. If anyone ever needed anything, he would say a prayer for their intention; and not just one, but many. Richard was generous. He gave to his children without hesitation. Richard was faithful. He always trusted in God, The Blessed Mother and St. Joseph. Even in the end, when he suffered dementia, he would say, “this is God’s will” and he surrendered to it, in faith.

The family would like to thank all the staff at Elmcroft for treating their husband and father, Richard, with love and respect throughout his entire time with them. They are an extension of our enormous family. We would also like to thank Hospice of Miami Valley for their support and care during our husband’s and father’s time in hospice. They made this difficult time easier.

Please join the family at St. Paul Catholic Church on Dec. 6 at 10 a.m. for a Mass and memorial. A reception will follow to celebrate the life of Richard H. Gomez.

Acts of loving kindness in lieu of flowers or donations.