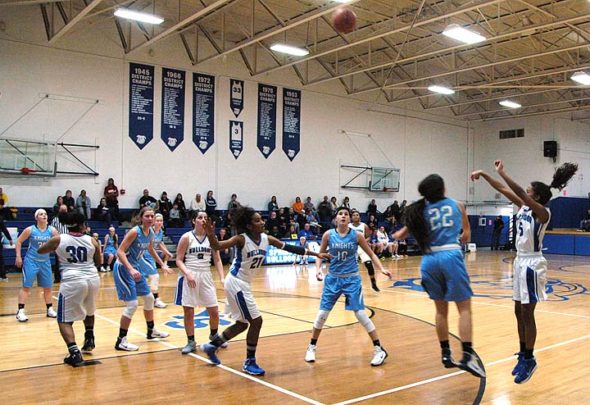 YSHS guard Julian Roberts (5) took a shot over the heads of visitors Legacy Christian in the baskteball matchup on Jan. 9. Despite the valiant efforts of Roberts and teammates Jasmine Davidson (30), Morgan Minnich (3) and Ayanna Madison (21), the Bulldogs did not emerge victorious, ending the game with a final score of 64–50. (Photo by Dylan Taylor-Lehman)

Girls basketball
The Yellow Springs girls basketball team has been fighting the good fight this season, taking on opponents left and right and gaining valuable practice and fundamental skill. This week, for example, the Bulldogs went up against the Legacy Christian Academy Knights.

The game started off on even footing, with the usual back-and-forth of two-pointers and impressive threes. The Bulldogs were on their game, and a clutch steal and charge down court was met by cheers from teammates and parents and the boisterous posturing of the team’s male classmate admirers, who occupied a section of their own. The game seemed especially foul-heavy, and many single points were scored from the foul line.

The game started to get away from the Bulldogs in the second quarter, as the Knights rebounded a few missed shots and converted them into points. Coaches took turns shouting in increasingly loud bursts, hoping that volume would lead to a proportional increase in score. Perhaps this worked for the visitors, as by halftime, Legacy Christian was up 30–21.

Lamentably, the game did not improve much for the Bulldogs from there. Senior Liz Smith nailed a couple of sick threes and a few tussles for the ball worked in the home team’s favor, but the score was 54–39 with five minutes left. Barring some athletic miracle, the game seemed like it was over. Legacy Christian knew this and worked on their passing game to wind down the clock. The Bulldogs pulled out some last-minute moves, but finally, the buzzer buzzed and the game was over. The final score was Yellow Springs 50, Legacy Christian 64.

This week’s game was the third game so far in 2017. The lady Bulldogs took on Miami Valley on Jan. 5, losing 57-41 and then fought Stivers on Jan. 7, allowing their opponents only the slightest chance to squeak by to victory. Stivers won, 39–37. The Bulldogs are now 5–5 for the season, with a record of 1–3 in the conference.

Swimming
The YSHS swimming Bulldogs challenged no less than 23 regional teams in what coach David Hardwick called “the top tier of a challenging and very competitive high school crowd.” The Bulldogs proved to be one of the stronger teams at the meet, finishing in seventh place overall and amassing 20 personal records.

“It was a great meet! Goals were achieved. Records were broken. Many surprises were had!” said co-coach Brad Martin. “Most importantly, swimmers did things they either never have done or didn’t think they could do before. Quite frankly, there were too many to mention!”

That there were too many to mention isn’t quite accurate, as the new records are listed below:

The girls were led by team captain Olivia Chick, who earned 29 points for the team, and has verbally committed to swim for Michigan State for the 2017-2018 season. She had the top finish of the day, breaking the meet record in the 100-yard freestyle with a time of 54.12, beating Sara Kruger’s 2012 record by .54 seconds. Chick also set another school and personal record as she finished second in the 100-yard backstroke, with a time of 59.19.

Also having a good day of scoring was Eden Spriggs, who took fifth in the 200 Individual Medley with a time of 2:35.73 and a sixth in the 100-yard butterfly with a time of 1:08.74. Jude Meekin earned four points for the Bulldogs, thanks in part to her strong finish in the 500-yard freestyle with a time of 6:52.63, a personal record.

The boys also did well in the meet, taking sixth place among the boys’ teams.

Hardwick was optimistic about what the record-setting means going forward in the season.

“We are at the mid-point of the competition portion of the season, ready to peak, so I am expecting more times to drop in the next two weeks,” he said.