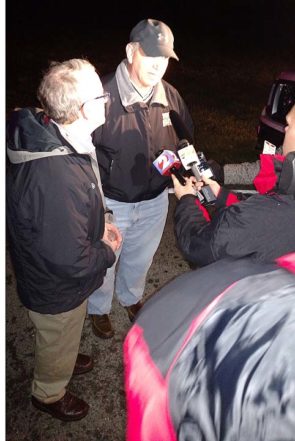 On Tuesday Greene County Sheriff Gene Fischer put out a call for any information villagers might have to help solve the murders of Skip Brown and Sherri Mendenhall. Fischer is shown above with Attorney General Mike DeWine as both made a statement on Sunday evening near the crime scene on East Enon Road

Click here to read the reports about the shooting incident.

The Greene County Sheriff’s department is looking for information from villagers to help solve the murders of Skip Brown and Sherri Mendenhall, who were killed in their East Enon Road residence just west of Yellow Springs on Sunday.

“We’re asking for the public’s help in figuring out why this happened,” Sheriff Gene Fischer said in an interview Tuesday morning.”People don’t normally just go up and kill someone. Did they have someone mad at them, any enemies?”

The bodies of Brown, 44, and Mendenhall, 63, who had both been shot, were found Sunday afternoon on the property of 4444 East Enon Road, where they lived. The building is owned by Brown’s grandmother, Elaine Brown of Yellow Springs.

About 12 sheriff’s department detectives and Bureau of Criminal Investigation, or BCI, agents are working on the crime, and several will be in the village today talking to people in coffee shops and on the street to gather information, according to Fischer. On Sunday night, Attorney General Mike DeWine happened to be in the village, so he came to the crime scene as well.

Fischer also emphasized that he doesn’t believe villagers are in danger.

“What we’ve seen on the crime scene and heard doesn’t indicate there are other targets in the area,” he said. “Can I say that with 100 percent assurance? No. But usually a crime scene is specific to the specific people involved.”

Fischer also said that last night he reassured Yellow Springs School Superintendent Mario Basora that he believed it is safe for children to walk the streets and attend school, as they would normally do.

“If I had a child there, I’d send him to school,” Fischer said.

Fischer said he could not speculate on motivations for the crime. Currently, the department has no person of interest in the case, he said, although he also added, “I would not throw out that kind of information. It’s too early in the case.”

Fischer also declined to comment on whether a weapon had been found on the property, or any other specific information.