Many Yellow Springs High School and Greene County Career Center students were recognized at the school’s annual academic awards ceremony held on May 16. Announced awards are as follows:

The Edwin Foos Scholarship of $1,000 each was awarded to Jordan White and Kasey Linkhart.

The Nancy and Andrew Bent Scholarship of $2,000 was given to Julian Roberts.

The L. Shelbert Smith award for $2,000 was awarded to Julian Roberts.

The YS Chamber of Commerce awarded $2,000 to Augie Knemeyer.

The GEM — Going the Extra Mile — Scholarship in the amount of $1,000 each was given to Aliza Skinner, Jordan White and Danielle Worsham.

The John McConville Scholarship for $1,000 was given to Hannah Morrison.

The James McKee Award for $1,500 each was given to Julian Roberts and Evening Hudson.

The Martha Dell Cadow and Warren Dell award for $1,000 was given to Augie Knemeyer.

Theater Arts awards for $500 each were awarded to Allison Bothwell, Duard Headley, Windom Mesure and Nicklas Wright; a $400 award was given to Olivia Brintlinger-Conn.

The Eric Smith CodeDog award for $500 went to Ziven Siler; the $250 award was given to Jordan White.

The Lisa Goldberg YS Arts Scholarship went to three awardees: $400 to Callie Smith; $300 to Elesha Harney, and $200 to Holly Weir.

The Metro Buckeye Award for $150 was given to Olivia Brintlinger-Conn.

The Leadership Spirit 50th Class Reunion Scholarship for $1,000 was awarded to Augie Knemeyer.

The Camille Willis Nursing Scholarship for $1,000 was awarded to Evening Hudson.

The Kay Corbin Memorial Scholarship for $5,016 was awarded to Nicklas Wright.

The Greene County Retired Teachers award for $1,000 was awarded to Olivia Chick.

The John Gudgel Scholarship for $750 was given to Victoria Willis.

The 365 Project Young People of Color award of $500 went to Julian Roberts.

The YSCF Youth Philanthropy Award was given to Kasey Linkhart.

The Bausch and Lomb Award was given to Jorie Sieck.

The Rensselaer Medal was awarded to Peter Day.

The Honda/OSU Math Award was given to Aidan Hackett. 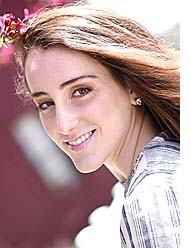 Hannah Morrison is the valedictorian of the YSHS Class of 2017.

Hannah Morrison and Callie Smith have been named the Class of 2017’s valedictorian and salutatorian, respectively.

Hannah Morrison is the daughter of Tamara and Brandon Morrison. At YSHS, she was captain of the varsity soccer, swim and softball teams, and was nominated MBC 1st Team All-Conference for soccer and softball. She is a member of the National Honor Society, SPIDEE and the Charlotte Drake Philanthropy Committee at YSHS. She plans to attend Miami University as a pre-med student.

Callie Smith is the daughter of Mary Lynn Naughton and Dave Smith. She plans to attend the Honors Tutorial College of Ohio University in the fall, majoring in studio art. She hopes to eventually have a career as a working artist or illustrator. At YSHS, she has been involved in SPIDEE, Charlotte Drake Philanthropy Committee, Theater Tech and National Honor Society.