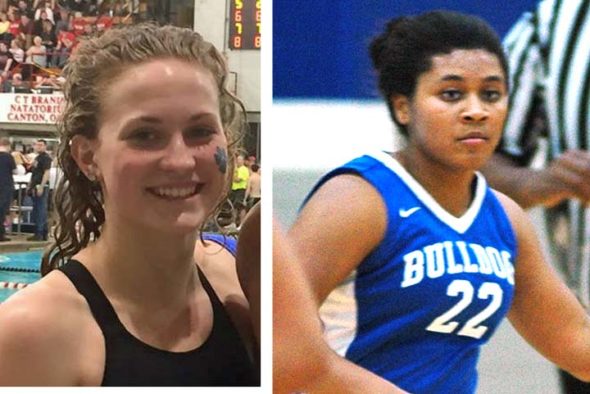 Two Yellow Springs athletes have been recognized by extra-scholastic authorities for their sporting prowess, one for obliterating a career-point benchmark and the other for churning the waters of competition and typically coming out ahead.

Senior Elizabeth Smith, number 22 on the YSHS Bulldog basketball team, secured her place in local basketball lore at the Bulldogs’ game against the Miami Valley Rams on Feb. 2 when she surpassed 1,500 points in her high school career.

A banner tallying her points hung in the YSHS gym all season, and it was steadily amended as she scored more and more points in pursuit of the vaunted 1,500-point milestone. The huge number was finally crushed in relatively low-key fashion: lining up to shoot a foul shot, she was aware of the import of the point, and not only regarding what it meant for her record, as there were only 50 seconds remaining in the game. And while she was “terrified” that she’d miss the shot, the quiet free throw from the foul line was sunk with ease. But the shot was simply part of the game, she figured, and so when YSHS coach Tim Minnich called a timeout, the reason why didn’t immediately register.

In an interview with WHIO following the game, Smith said she thought the timeout was called so that Minnich could scream strategy at the team. But it turned out that the timeout was called to recognize her achievement. Teammates ran up to congratulate her and Yellow Springs athletic director Nate Baker presented a plaque commemorating the remarkable feat.

Smith started out the season with 1,147 points and averaged 19.5 points and 10.2 rebounds per game. She is one of the top five conference leaders in scoring, rebounds, assists, blocks and steals. The Feb. 2 game against Miami Valley was indicative of her skills, as she scored 23 points against the Rams. Following the game, she was named WHIO’s Jeff Schmidt Auto Group Student Athlete of the Week.

While the game with Miami Valley ultimately resulted in a 59–51 loss for the Bulldogs, the team’s improvement from last year’s 2–21 finish to this year’s 12–10 is a success in and of itself. Many observers have said that this progress has a lot to do with Smith’s key role on the team.

As was pointed out in her interview with WHIO, exactly where she’ll play ball in college is up in the air, but wherever she goes, it will be on an athletic scholarship.

Olivia Chick, a senior on the YSHS swim team, was modest in discussing her accolades, saying that she was more proud of the team’s success as conference champs that she was about being deemed the Metro Buckeye Conference’s Swimmer of the Year.

“There aren’t as many kids on the swim team this year, which makes the achievement more special,” she said in a recent interview. “And it’s been exciting to see my teammates dropping times on every race.”

Chick was voted Swimmer of the Year by a consortium of conference coaches. The distinction comes not only from her many first-place finishes throughout her high school career but from her dedication to the sport and how this drive has helped her qualify for district and state competition.

Her dedication to swimming would no doubt exhaust anyone who isn’t at least partly aquatic. She has between eight and nine practices a week, two of which are in the twilight hours before school starts. She started swimming with the Sea Dogs at age four and then began club swimming at age seven. After trying her hand at other sports, sometime in middle school she decided to focus solely on swimming. Since then, it’s been lap after lap in the pool, which has resulted in win after win.

She said that her signature events are the 100- and 200-yard freestyle events, though this year she branched out a bit and focused on the backstroke. No matter the race, rigorous practice has helped her mentally and physically, as well as helping her develop strategies key to her success. When she was younger, she’d try to save her fastest swimming for the end of the race. Now, she starts her races in an all-out sprint, but also reigns it in when she needs to and focuses on the third 25-meter segment of each race. Elegant turnarounds are crucial too, she said.

Chick was courted by a number of colleges starting the summer before her junior year and was able to go visit and train at three schools. She ultimately decided on Michigan State University, as it is close to family and she feels like she can contribute to the team there, as opposed to being just another swimmer on the team of a larger school. In addition to swimming, she will be majoring in elementary education. Practice starts in August of this year.

Chick said that she has appreciated meeting so many people and making so many friends through her various swimming endeavors.

“Being part of the YSHS swim team has been very fun and rewarding,” she said. “I’m interested in following the team and seeing how they are doing” once she is gone and swimming in bluer pastures.