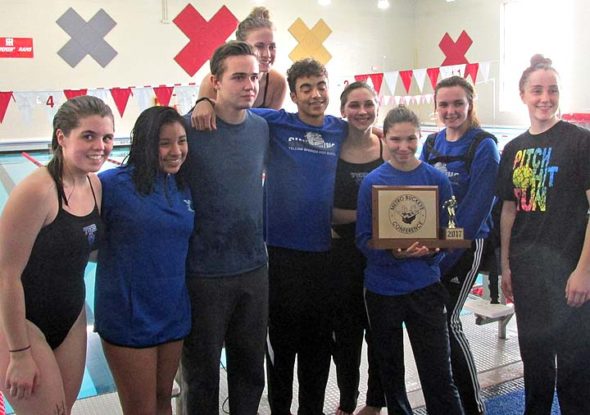 “We are the champions!” YSHS swim coach David Hardwick exclaimed. “Two back-to-back conference wins — this is a new record! So much to be proud and happy for. Did we have fun and still work hard for this win? YES! We stepped up and swam well, and we scored big!”

Hardwick had reason to be ecstatic, as the YSHS Bulldogs girls swim team captured their second Conference Championship in two years, a title clinched last week at the Metro Buckeye Championship hosted by Trotwood Madison High School. The girls scored 134 points, coming in first place among five teams. The boys team came in fifth, making for a cumulative fourth place finish overall. As per usual, the team accomplished 12 personal records (PRs), Hardwick said, showing there was no slowdown in a season that has already been full of impressive improvements.

Highlights of the boys’ performance at the meet included several good swims and four new PRs.

The boys’ relays included a fourth and a sixth place. Their fourth place was in the 200-yard medley relay, finishing in 2:20.29. The team, comprised of the Bleything brothers, Walker and Mesure, also finished sixth in the 400-yard freestyle relay, completing the race in 4:46.26.

The team would have done even better, Hardwick noted, but one of the boys swimmers was sick and a disqualification in the first girls’ relay cost the team a few points. But these were minor considerations and accolades from the coaches poured in following the successful meet.