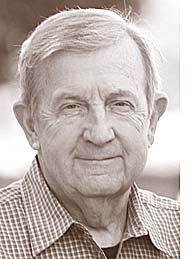 John Lee Winks, 71, of Yellow Springs, passed away peacefully in his home, surrounded by his loving family, on Monday morning, Feb. 6, 2017. He was born in Springfield on Jan. 12, 1946, the son of the late Paul Wendell and Imogene L. “Jean” (Davis) Winks.

He proudly served his country in the U.S. Air Force during the Vietnam War. Following his military service, he earned his B.A. in education from Morehead State University. John worked as a police officer for the Village of Yellow Springs for 25 years, and later as a bailiff for the Fairborn Municipal Court for 10 years.

A gathering of family and friends was held Friday, Feb. 10, in the First Presbyterian Church, Yellow Springs. The Yellow Springs Police Department stood honor guard by John’s casket. His celebration of life immediately followed, with Pastor Aaron Saari presiding. Entombment with military honors was in the Ferncliff Cemetery Mausoleum. Memorial contributions may be made to Intrepid Fallen Heroes Fund, One Intrepid Square, New York, N.Y. 10036, or go to http://www.fallenheroes.org.&nbsp;

Our family would like to thank everyone for the outpouring of love and support. We miss him more than anything, but know in our heart of hearts, he is at the right hand of God and with his family in Heaven.