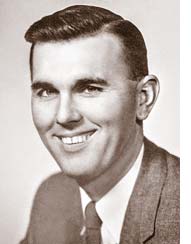 Robert Lawrence Parker was born and raised in Needham, Mass., Aug. 14, 1926. He died at home at the age of 90 on Jan. 31, 2017. Growing up during the Great Depression, he lived with a big group of relatives, delivered newspapers by bicycle and worked in a grocery store. After his high school graduation, he enlisted in the Navy and served as a sonar instructor in World War II. He was the first to go to college in his family, thanks to the assistance of the GI Bill for veterans. Bob became a fifth- and sixth-grade teacher in Massachusetts and completed a master’s degree in outdoor education under Cap’n Bill Vinal. In 1957, he moved to Yellow Springs to lead the school camp in the Glen, bringing his first wife, Dorothy Haffey, and their three small children. He became an instructor of physical education at Antioch College, where he taught fencing, square dancing, canoeing and outdoor skills (thrills?). Bob joined the Department of Cooperative Education at Antioch, eventually becoming the chair of the department. Bob strongly believed that jobs are primary teaching agents and he worked to strengthen cooperative education in other colleges, including historically Black colleges and universities. He retired from Antioch in 1991.

Bob formed a new family with Sue Bateman and her daughter, Jennifer, when Bob and Sue married in 1982. At this time in his life, Bob became more humorous and was sometimes funny. Bob enjoyed restoring furniture, especially caning and weaving new seats. He was an avid reader of history and a self-taught photographer. He combined these two interests in the many slide shows he gave to the public on the history of the Glen and other topics. An athlete and a vigorous outdoorsman, Bob relished biking later in life. Bob loved to sing, with a guitar around the campfire or in Yellow Springs Center Stage theater productions. Bob cared about people and it was in interacting with others that Bob really shined. He never stopped trading stories with people and sharing his skills and knowledge. He was loved by many people for his ability to see the best in them and for his willingness to help others improve their lives.

In lieu of flowers, donations may be sent in Bob Parker’s name to Antioch College, 1 Morgan Place, Yellow Springs, OH 45387, or Glen Helen Ecology Institute, 405 Corry St., Yellow Springs, OH 45387. Please join us for a celebration of the life of Robert Parker on Saturday, Feb. 11, 2–4 p.m., at the Glen Helen Building on Corry Street. Refreshments will be provided; bring a dish to share if you wish.