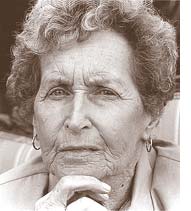 Rose Marie Miller (Gregerson) passed away peacefully in her Springfield, Ohio home on Jan. 19, 2017, at the age of 96, following a very well-lived, full life. Born in Perham, Minn., on Aug. 31, 1920, to Lawrence Gregerson and Anna Voves, Rose was the oldest of eight children and the last surviving member of her family. She was a devoted mother to her five children, six grandchildren and two great-grandchildren. Rose was an envied and highly skilled fisherman, a dedicated homemaker and great cook. She was beloved for her warm, outgoing personality.

After graduating from high school, Rose went to the Mt. Sinai Hospital School of Nursing in Chicago and completed her education to become a registered nurse. She met her future husband, Max, while working as a head surgical nurse at Mt. Sinai Hospital and they married in 1944 in Chicago. They enjoyed 51 years of marriage together and were excellent role models for their children. Max, a U.S. Air Force officer and decorated veteran of WWII, was stationed all over the USA and Germany, where the family of seven traveled throughout Europe in a Volkswagen Beetle. The family moved to Enon, Ohio, in 1960 when stationed at WPAFB. Rose and her husband were very active in the Enon community. She and Max retired from the USAF in 1964 — because if you ask her, she was “enlisted” too — and remained in Enon for Max’s second career in education until 1979, when they finally retired. The couple moved to Naples, Fla., where they especially enjoyed beach walking and fishing in the Gulf of Mexico in their fishing boat, named the “RoMax.” Rose and Max enjoyed a very active social life with many dear friends and traveled to many countries until his death in 1995. About five years ago, Rose moved to an independent living apartment at Oakwood Village in Springfield to be closer to family.

Honoring her wishes, there will be no formal memorial service. Rose’s ashes will join those of her beloved husband in the Gulf of Mexico. Rose suggested that those who wish to honor her memory donate to the American Heart Association or American Cancer Society. Rose’s warmth, devotion to family and her cooking will be deeply missed. Sweet dreams, Rose.