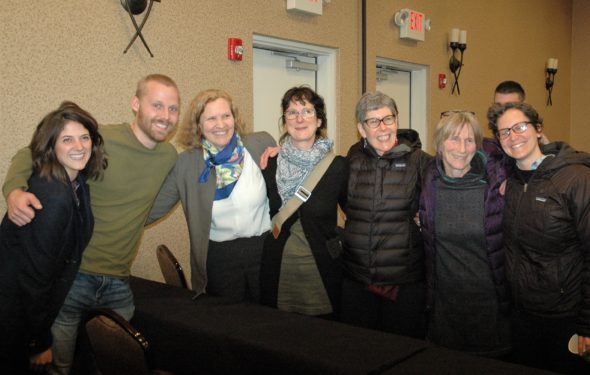 Leaders and supporters of Community Solutions celebrated the local nonprofit's new land holdings Thursday night. Community Solutions bought 128 acres of land on the western edge of Yellow Springs at auction on March 16, paying $655,000 for two of nine parcels up for sale. All parcels of the 267-acre Arnovitz farm were sold to a total of seven buyers. (Photo by Audrey Hackett)

Agriculture and conservation were the winners at the auction of the 267-acre Arnovitz farm Thursday night, following weeks of speculation about the potential for development along the western edge of Yellow Springs. All nine parcels were sold, to a total of seven buyers, for a combined amount of over $1.6 million.

Nearly half the auctioned land went to Community Solutions. The local nonprofit purchased two of the nine parcels, Tracts 6 and 8, totaling about 128 acres, for $655,000.

“It feels miraculous,” Executive Director Susan Jennings said minutes after auctioneer Ron Denney banged his gavel and brought the auction to a close.

Community Solutions plans to establish a center for regenerative farming on the property, as well as put about 80 acres into conservation in collaboration with Tecumseh Land Trust and other groups, according to Jennings earlier this week. At the auction, Jennings said the nonprofit also hopes to relocate its offices to the existing home on Tract 6.

The single largest auctioned parcel, 124-acre Tract 8, is a conservation priority for Tecumseh Land Trust, or TLT, and the Village of Yellow Springs. The land contains two tributaries of Jacoby Creek, plus woodlands around the creek, and is part of the long-envisioned Jacoby greenbelt. Village Council voted unanimously on March 6 to commit up to $200,000 in Village greenspace funds toward the purchase of a conservation easement, clarifying with a second unanimous vote this past Monday its intent to focus those funds specifically on the creek’s preservation. Jennings said earlier this week that Community Solutions shares TLT and the Village’s commitment to protecting the creek.

The next largest parcel, 84-acre Tract 9, was purchased by Miami Township resident Julie Jones for $400,000. Jones declined to comment on Thursday about her plans for the land, which is currently being farmed.

The Village is in discussions with both Community Solutions and Jones regarding establishing a conservation easement on each property, according to Village Manager Patti Bates at the auction. “If their values match with village values, we’ll go from there,” she said.

Krista Magaw, executive director of TLT, said she believed Tracts 8 and 9, together representing over three-quarters of the auctioned land, would continue to be farmed.

Springfield attorney Greg Lind purchased Tracts 1 and 2, totaling about 26 acres, for $216,000 with conservation in mind. Lind said Thursday that he is working with TLT to conserve 23 of the acres, including protecting wetlands on the property. The remaining three acres will be a homesite, he said.

And local contractor Jimmy Kingsolver purchased 13-acre Tract 3 for $142,000. He currently lives in a home on the property and intends to continue living there, he said Thursday. Kingsolver bid repeatedly on a combination of three properties throughout the evening, winning just the one.

The auction at the Hilton Garden Inn in Beavercreek drew lively interest, with more than 80 people attending, including around 20 residents of Yellow Springs. Forty-nine attendees registered as bidders.

Bidding over the two-and-a-half-hour auction was initially brisk, then slowed down to a contest between a handful of bidders. Particularly hard-fought was Tract 6, which changed hands between Community Solutions and Kingsolver around a dozen times before the local nonprofit made the winning bid.

TLT’s Magaw said she was pleased with outcome. “I’m happy. We had a good mix of bidders,” she said. And she expressed confidence that TLT would be able to purchase easements on “most or all” of the parcels before the closing date of Friday, April 28.

“There’s still work to be done,” she said.

2 Responses to “Community Solutions buys half of Arnovitz farm”