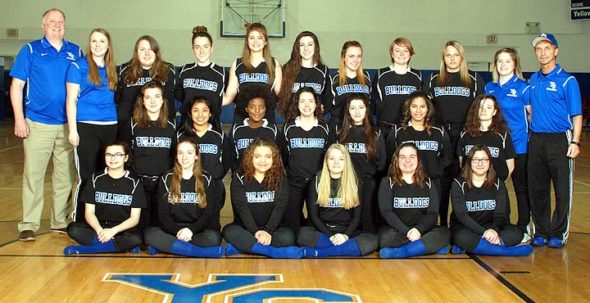 A new high school sports season has dawned on the village. Sports that previously kept athletes indoors fall by the wayside in favor of competition under the glorious spring sun. It’s spring sports season, after all. Local athletes look forward to the pock-pock of balls on a tennis racket and the chance to run for miles in the rejuvenating mist of a spring morning.

District Athletic Director Nate Baker is likewise caught in the bustle of spring, as there is a long list of things to do to get the Bulldogs battle-ready: three of the high school’s spring sports take place off-site, and he has to coordinate practices with those facilities. He has to take inventory of equipment and uniforms and place orders for anything deficient. He makes sure coaches have their certifications, sends memos to parents and plans for team picture day. Weather is always a factor in how the season goes, he said, and he never quite knows how many kids are going to be on a team. If many or few people sign up to play, then that’s the roster for the season.

Fortunately, one part of the process has long been taken care of, as the spring 2017 game schedule was determined two years ago. The Bulldogs are part of the Metro Buckeye Conference and play the same teams for 75 percent of season’s games, so it’s easy to schedule those games ahead of time. The rest of the season is just a fill-in-the-blanks, he said. He sets up games with other teams, and they make sure to abide by the gentlemanly exchange of playing each other home and away.

Baker’s hard work paid off for the Bulldogs, as the 2017 season is now in full swing, literally. The first softball and baseball scrimmages of the 2017 season began last week. According to Bulldogs softball coach Jimmy Delong, who is returning for his sixth season as coach, it’s shaping up to be a good season.

This year’s version of the Yellow Springs High School girls’ softball team is a veteran team, he said as it returns 16 players and eight starters from last year’s powerful squad, which tied Middletown Christian for first place in the MBC League. While the team has strength in numbers this season with 21 players, they also have an abundance of returning talent, he said. The team will be led by senior standout pitcher Hannah Morrison and four-year starting catcher Danny Horton.

“We have a big roster this year and have a lot of returning players,” DeLong said. “It’s an experienced group. This is the first year we’ve been top-heavy on upper classman.”

Morrison, who tossed a no-hitter in the Bulldogs last regular season game at Dayton Christian, had a dominant season on the mound a year ago, with 154 strikeouts in 76 innings of work. Additionally, Morrison tossed a no-hitter, a one-hitter, and a two-hitter last year. Coach DeLong commented on Morrison: “Hannah’s pitching success is driven by her determination to get better. Morrison also led the team in hitting last year with a .571 batting average while also leading the team in RBI’s, hits, runs scored, and stolen bases.

“Even after all that success last season, she went to pitching lessons every week in the off-season to try and refine and improve her game,” DeLong said.

Just as important to Morrison’s pitching success will be senior Danny Horton’s ability to catch her. “Horton is a very underrated player — she is one of the few girls with quick enough reflexes and the mental toughness to catch a girl who throws with the type of velocity Morrison has,” DeLong assessed.  Indeed, this is Horton’s fourth year as the starting catcher for the Bulldogs, and while she is a staple behind the plate on defense, she is also one of the top hitters on the team as she had a .432 batting average. Last year, she was in the top 4 on the team in RBI’s and hits.

Other leaders on the team come from the returning infielders. One of the hardest workers of the group is second baseman Elly Kumbusky. Kumbusky has started the past two seasons at second base and finished last season with a .429 average, and was in the top five on the team in batting average, hits, RBIs stolen bases and runs scored.

“Kumbusky is another player with a strong work ethic. She spent all winter going to hitting lessons to improve her hitting,” DeLong said.

Junior Kadie Lafferty will be the shortstop for the Bulldogs. Lafferty is a quick lefty hitter who can hit for average and led the MBC in stolen bases her freshman year.

“Lafferty is our leadoff hitter and can do it all—hit, run, catch, throw and steal bases,” DeLong said. “She has a natural talent on the field and has been our defensive leader at shortstop.”

Junior Gracie Price anchors first base and returns as a deep ball threat who was second on the team in RBIs and runs scored.

“Griffis has a strong arm with an exceptionally quick release and looks to be solid on defense and hitting. We’re looking at her to be a key contributor to our infield as well as be our number two pitcher,” DeLong said.

The outfield will be led by junior speedsters Kallyn Buckenmyer and Brielle Willis, as well as steady defensive player Victoria Willis. Buckenmyer and Brielle Willis are the two fastest girls on the team, he said, and “we’ve been working on utilizing their natural speed ability to try and manufacture some runs.” Other outfielders competing for playing time include junior Janine Stover, sophomore Cierra Richeson and freshman Zoe Lafferty.