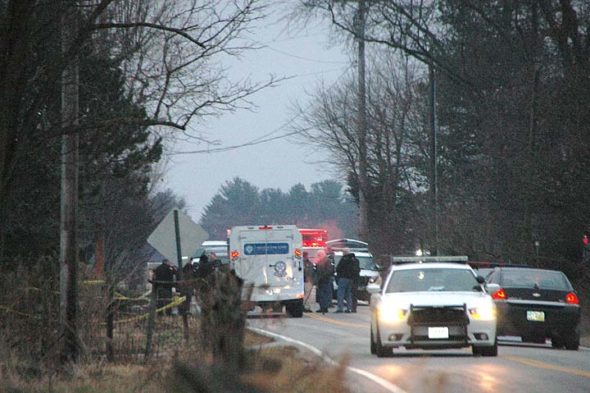 Local police and county sheriff cars at the scene on Jan. 15, when William "Skip" Brown and Sherri Mendenhall were found shot and killed at their adjoining East Enon Road apartments. Today the Greene County Prosecutor's office announced that a grand jury has indicted the brothers Dustin and Bret Merrick for aggravated murder, among other charges, in the case.

A Greene County Grand Jury has indicted brothers Dustin and Bret Merrick for the murders of William “Skip” Brown and Sherri Mendenhall on Jan. 15 at their homes on East Enon Road just west of Yellow Springs, according to a press statement from the Greene County Prosecuting Attorney released Thursday, March 30.

The indicts carry death penalty specifications, according to the press release. Bond for both defendants is set at $5 million.

The brothers were arrested on Jan. 25, and at the time only Dustin Merrick, who was a former employee of Brown, was charged with aggravated murder. At that time, Bret Merrick was charged with two counts of complicity to aggravated murder. Bret Merrick had admitted to police that he and his brother had entered the Brown property early in the morning of Sunday, Jan. 15. The bodies of Brown, who owned the local company Legendary Roofing, and Mendenhall, who lived in adjoining apartments, were found at about 3 p.m. on that day.