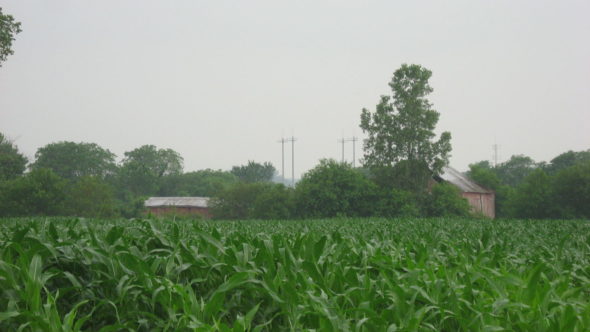 A sand and gravel company is seeking permits to modify its mining operations on property just north of Yellow Springs in Mad River Township, worrying some area residents.

Tecumseh Land Trust, or TLT, is alerting local residents to the situation, and encouraging interested citizens to attend a public meeting this Monday, March 27, at 7:30 p.m. in the cafeteria of Greenon High School, 3950 S. Tecumseh Rd., Springfield. Representatives from the mining company, Enon Sand & Gravel, and the Ohio Department of Natural Resources, the state permitting authority, will be on hand to answer questions.

According to a March 7 report in the Enon Eagle, Enon Sand & Gravel is proposing modifications to its mining permits that would allow it to dig 63 feet deeper — below the shale layer, where the mine’s previous owner, Demmy Sand & Gravel, had stopped. The company owns mines near Fairfield Pike along South Tecumseh Road, about four miles north of Yellow Springs.

The company’s existing permits date back to the 1970s, the Enon Eagle report said.

According to that same article, citizens at a March 6 Mad River Township meeting raised a variety of concerns, including possible contamination of private wells, air quality problems and the lowering of home values. A representative from the Clark County Combined Health District, Larry Shaffer, also weighed in, citing possible water contamination and other problems with wells in the area.

TLT Executive Director Krista Magaw echoed those concerns this week. Blasting through the shale layer releases naturally occurring radioactive materials, similar to what happens with fracking, she explained. The release of these materials could spoil wells used for small farming operations in the area, and could negatively impact nearby preserved properties. And while Yellow Springs drinking water comes from underground sources south of town, and therefore would not be directly affected, the “underground connectivity” that ultimately ties together all water in an area makes the deeper mining practices worrisome, according to Magaw.

“What’s going on next door really makes a difference,” she said.

Yellow Springs residents with questions and concerns can call TLT at 937-767-9490 for more information, or attend the March 27 meeting at Greenon High School.