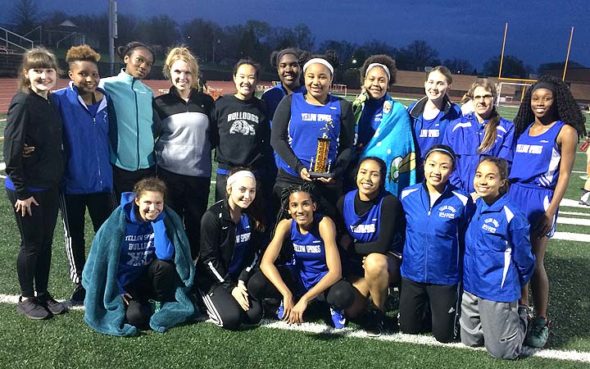 “What a difference a week makes” could have been the slogan of the YSHS track and field team’s this week, said coach John Gudgel, as the Bulldogs found themselves performing exceptionally well at the Waynesville Invitational last week. The Girls team finished in second place out of 11 teams and earned a trophy as the runner-up. The boy’s team finished tenth out of the eleven teams, but Coach Gudgel maintains that the team’s marked improvement will only propel them higher up the rankings.

Other Bulldogs who earned second- place finishes included Jude Meekin, who crushed the 3200 meters, Amani Wagner in discus, Jasmine Davidson in shotput, and True Hall in the 100 hurdles, while the team of Brintlnger-Conn, Julie Roberts, True Hall and Ayanna Madison took second in the 1600 relay. Other scoring Bulldogs included Lydia Fleetman and Stacia Strodes.

The boys’ track team Bulldogs was led by Sam Wildenhaus, who finished third in the 3200. Joe Plumer finished in fourth place in the long jump, while Levi Brown took fifth in the 1600 meters and the team of Wildenhaus, Raven Campbell, Zach Lugo and Elliot Smithberger took fifth in 4×800 relay.

According to YSHS tennis coach Stacey Knemeyer, the tennis team’s performance this week could be encapsulated by the slogan “Bulldogs Bounce Back to Victory.”

The Bulldog tennis team traveled to take on its nemesis the Miami Valley School last Tuesday, and while the Bulldogs ultimately lost, Knemeyer said that it wasn’t without a fight! Senior Augie Knemeyer and sophomore Forrest Rowe played every ball, forcing their opponents to sweat, talk to themselves and question whether or not they could beat the mighty Bulldogs. Unfortunately, their arch rivals did pull ahead to win the day, but as everyone knows, there are many battles in any way.

“Let’s just say, when the Rams come to Bulldog country, they are going to be shaking in their Nike Zooms,” Knemeyer said.

The Bulldogs quickly bounced back to their winning position with a monumental win over the Dayton Christian Warriors on Thursday last week. With clutch wins on all the singles courts and a win on the second doubles court, the Bulldogs quieted the chatter with this important conference victory. Without question, the highlight of the match was Augie Knemeyer’s 7–5, 6–4 win over senior Warrior Paul Hodge. This rivalry has been nothing short of intense. Down 4–5 in the first set, Knemeyer held strong to win the next three games and the set. But the real clutch moment came when Knemeyer, serving down 15–40 at 4–4, delivered two mammoth aces to end Hodge’s hope for a break.

Riding on the high of the win against the Warriors, the Bulldogs swept the Greenview Rams the following Monday, winning on all five courts.

“No doubt the Bulldogs are playing with confidence and experience,” coach Knemeyer said. “But I can most assuredly say, they are having fun too!”

The Yellow Springs softball team traveled to Legacy Christian for a Metro Buckeye Conference (MBC) matchup and garnered a most convincing 10–1 victory. The Bulldogs scored two runs in the first inning on back to back triples by Hannah Morrison and Gracie Price and then rode the dominate pitching of Hannah Morrison to stay unbeaten in MBC play.

Coach Jimmy DeLong was pleased with the result. “I was worried about this game,” he said. “In our first matchup at home against Legacy Christian we only won by four runs but [in this game] the team came out on fire with their hitting to grab the early momentum, and they never lost it.”

The Bulldogs used that first-inning momentum to score five more runs in the second inning. Danny Horton started the inning with a base hit, followed by Kelsie Lemons, Kallyn Buckenmyer, Brielle Willis and Kadie Lafferty, who all scored and gave the team a 7–0 advantage after two innings.

“Once we jumped out to a seven-run lead, I knew Morrison would take over from there,” stated Coach Jim. And take over she did. Morrison pitched a complete game for the win, allowing one run on two singles and no walks while striking out 13. Morrison improved her record in MBC play to 2–0 with 31 strikeouts in 14 innings pitched and a stellar earned run average of 0.50.

The Bulldogs also played two non-conference games this past week, losing at home to Northeastern and at Oakwood. In the Northeastern game, the Bulldogs juggled their usual lineup. “I decided to move the girls around for this game,” DeLong said of his strategy. “I let some of the bench girls get playing time as well as give my backup pitcher — lefty Kadie Lafferty — some needed experience. I was pleased with her outing — she really battled on the mound and never lost her concentration.”

In the Oakwood game, Yellow Springs held early leads of 2–1 but then fell behind 4–2 before rallying to tie the score at 4–4 in the fifth inning. In the end, however, Oakwood pulled away for a 9–4 win against the Bulldogs.

“Oakwood is a Division II school and provided good competition for us,” DeLong assessed. “Those types of games help us prepare for MBC league games as well as the sectional tournament. We stayed right with that team the whole game, so while we lost, it was still a ‘teaching moment’ and good for the girls to play against that level of competition.”