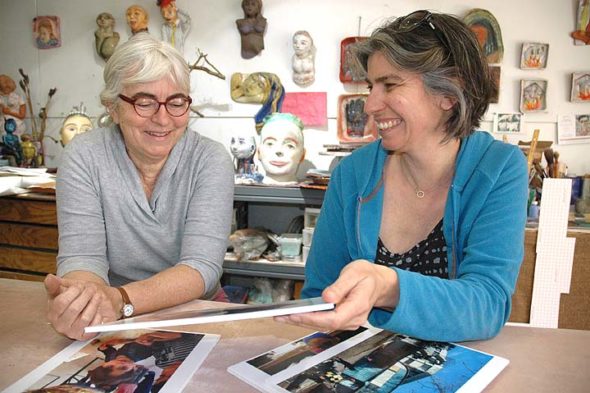 Local artists Beth Holyoke, left, and Kaethi Seidl spent a month in a Greek refugee camp in February. Back home in Holyoke’s Yellow Springs studio, they looked over photos of some of the children they worked with at the camp. (Photo by Diane Chiddister)

We’ve all seen the heartbreaking photos: rickety small boats overflowing with human bodies, bobbing across a dangerous sea. A toddler who didn’t come out alive washed up on shore. Wild-eyed and desperate-looking families stranded at a border station, pushed back by police in full military gear.

Many of us see the photos of the refugee crisis and feel overwhelmed. What can one person do?

A lot, according to local artists Beth Holyoke and Kaethi Seidl.

A yard sale to raise money for Elpida, a refugee shelter in northern Greece, will be held on Saturday, April 22, from 9 a.m. to 3 p.m. at 141 N. Walnut, the home of Marie Hertzler and Brian Maughan. The sale is being organized by Kaethi Seidl and Beth Holyoke, who spent the month of February at the shelter and hope to raise money to bring art projects to its residents.

Those who wish to donate items to the sale may call Hertzler at 767-2058, or drop off items anytime after Wednesday, April 19, in the driveway beneath the balcony.

“We already know a person can make a difference,” Holyoke said recently, describing what she learned from the month she and Seidl spent in a Greek refugee camp in February. And during that month she understood, through meeting and talking to volunteers from all over the world, how much difference a person can make.

“You think about what you want to do, and then do it,” she said.

The women’s desire to make a difference began several years ago, when Seidl, who is German, began hearing from her mother in Germany about her volunteer efforts to help a family of refugees, by driving to medical appointments, doing paperwork and tutoring children.

Her mother was motivated by her own experience, Seidl said. At age 9, due to the war, her mother’s family had to leave their home in Poland forever.

“She knows how hard it is” to be a refugee, Seidl said.

The stories inspired Holyoke a year ago to begin making ceramics with the images of the refugee crisis. She exhibited those pieces, including platters painted with faces of refugee women or boats crowded with people, at The Winds Café, the Yellow Springs Pottery and the Dayton Peace Museum.

But the ceramics were created from images from Holyoke’s imagination, and the women wanted to see the reality of the refugee crisis, to find some way to help out.

“To see the people with our own eyes, they’re real, that makes a difference,” Seidl said. 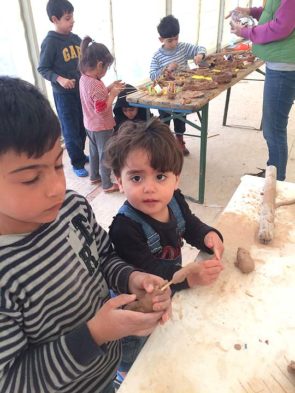 So through the website helprefugees.org.uk, which was seeking volunteers, Seidl and Holyoke made their way to northern Greece, where they spent the month of February in Thessaloniki, the second largest Greek city in which a “maze of NGOs” runs about 20 refugee camps. At first, they helped to sort clothing and also to cook for a group that provided warm meals for refugees who live on the streets.

“It’s pretty depressed. Unlike in this country, the homeless are families, whole groups of people,” Holyoke said. “We saw people looking through dumpsters for food.”

During their final two weeks, Holyoke and Seidl were assigned to Elpida (“hope” in Greek), a formerly abandoned factory that had been turned into a refugee shelter by a partnership between the Radcliffe Foundation and a wealthy individual who believed he could create more humane ways to house refugees. And indeed, the shelter, which mainly housed women and children from Syria, Iraq, Pakistan and Afghanistan, offered a large room for each family, and facilities better than in most of the country’s camps, which are run by the military. Volunteers showed up every week to offer medical or counseling services, and the shelter even sponsored a weekly dance for the women and children.

“Their main mission was to treat everyone with dignity and respect,” Holyoke said.

But while the living standards were higher than in some camps, the refugees still struggled with the difficulties of having left their homes and not yet knowing where they’d end up.

At the shelter, Seidl and Holyoke were inspired by the other volunteers who had found ways to join the effort. One American woman purchased plane tickets to Greece the day after Trump was elected president, upset by the election results. And they were surprised at the youth of some of the main organizers.

“There are such young people doing this work, many in their early 20s, from all over the world,” Holyoke said.

While Seidl and Holyoke were happy to pitch in where needed, they also hoped to share their skills as artists. When they offered to do art projects with the refugees, the shelter organizers were responsive.

“We were there at a good time, they already had the basics and were ready to do more,” Holyoke said.

Looking for materials, Seidl and Holyoke found many large plastic bottles, now empty of the bottled water that people drank. Another volunteer suggested making flowers from the bottles, so the artists found a way to do so, cutting the plastic into flower shapes, then spray-painting the shapes, a process they taught in workshops. Pretty soon the building bloomed in large colorful flowers that were fastened to the building’s grey walls.

“It really added to the atmosphere,” Holyoke said. “We heard a lot of comments that people appreciated the flowers.”

The artists also held clay workshops for the children, who enjoyed creating with clay. Because there were no opportunities for firing the end products, the clay was used over and over again.

Back in the states, Seidl and Holyoke hope to raise money to provide more art projects for the shelter occupants. There are no resources available for art, so that the $50 the women donated so a young volunteer could buy paint to create murals on the walls turned that project into reality.

To raise money, Holyoke and Seidl are holding a yard sale on Saturday, April 22, from 9 a.m. to 3 p.m. at the home of Marie Hertzler and Brian Maughan at 141 N. Walnut. They hope villagers attend, and they’re also looking for donations, either financial or of items for the sale. Those who want to donate can do so by calling Hertzler at 767-2058, or dropping donated items off in the driveway beginning Wednesday, April 19.

The family connection with the refugee crisis sparked by Seidl’s mother continues. This summer, Seidl’s college-age daughter, Francesca, and a Yellow Springs friend, Anna Williamson, will spend the month of July as volunteeers in the same shelter. And in August Holyoke and her husband, Andy, will return to help with plumbing and electrical work.

When they left, the shelter occupants asked that Holyoke and Seidl tell others what they experienced.

“We were asked to take their stories back to our country, to let people know what it’s like,” Seidl said.

And that’s what they’re doing.