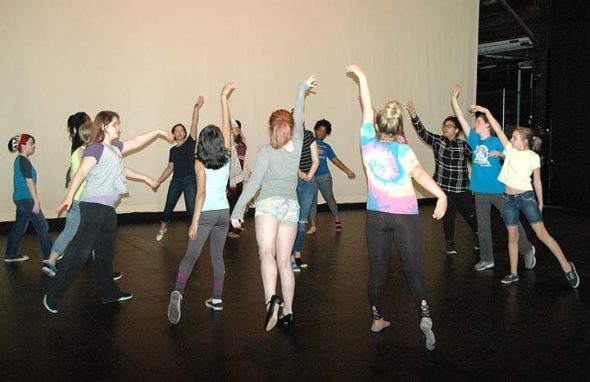 Yellow Springs High School is presenting the Rodgers and Hammerstein classic “Oklahoma!” this month, with performance dates April 21–23 and 28–30 at Antioch’s Foundry Theater. Directed by Ed Knapp, the musical is still relevant to contemporary teens, according to several of the Yellow Springs actors stepping into starring roles. (Photo by Carol Simmons)

YSHS production of ‘Oklahoma!’ has legs — about 90

The sweet, lilting tune that opens the Broadway musical “Oklahoma!” was unconventional when the show premiered in 1943, breaking the mold on stage musical formulas and expectations.

“It was a milestone in how it changed musical history,” said Ed Knapp, who is directing the Yellow Springs High School production of the Rodgers and Hammerstein classic this month, with performance dates April 21–23 and 28–30.

When “Oklahoma!” made its New York debut, the curtain on Broadway musicals typically rose to a big, show-stopping number. In “Oklahoma!” the show-stopper comes at the end. But even more significantly, every song has a narrative purpose.

“Up until this time, songs didn’t mean anything to the story,” Knapp said during a recent rehearsal at the Foundry Theater. Songs and dances offered amusement, entertainment and emotional depth, but they provided little new information. “Oklahoma!” was the “first time that the songs say something” that furthers the plot, Knapp said. “We take that for granted now.”

The show’s historical background and imminently hummable tunes notwithstanding, Knapp said there was some question amongst the school community as to whether a seemingly simple musical created in the early 1940s and set in 1906 pre-state Oklahoma would speak to 21st century youth.

But “‘Oklahoma!’ is more than what it seems,” Knapp asserted. It may have acquired a reputation as reflecting a certain World War II-inspired, optimistic patriotism, as well as a glorified view of white westward expansion, but that’s a superficial reading, he said. There’s a dark underside to the story, and characters are more complex than that of a simple girl-meets-boy romance.

The complexity of the characters’ lives and motivations resonates with YSHS senior Nicklas Wright, cast as Curly McLain, the show’s male lead.

“Curly plays this upright guy … but he’s a bully, too,” Wright said.

Curly, a cowboy, vies for the affection of farm girl Laurey Williams, but has a rival in Jud Fry, a hired hand and social outcast. In the white frontier community, Curly is seen as attractive and decent, while the outsider Jud is viewed with disdain and suspicion. Yet Curly’s behavior toward Jud is arrogant and mean, and it’s bothersome to the Yellow Springs teen actors who have a higher standard for how a “good guy” behaves.

“He tries to get Jud to kill himself,” Wright said, with an incredulous tone that seemed to ask, what kind of person does that?

“He’s troubled and he’s sad,” Headley said of Jud. “It’s an interesting facet for sure.”

Hoff said that Laurey’s independence is tempered by social conventions of the time, which she finds thought-provoking. “I’m a total feminist,” she said. So she notices that while Laurey sings “I don’t need a man” at one point. In “Surrey with the Fringe on Top,” she “has to sit like a ‘lady.’”

Nia Stewart, a junior who plays Laurey’s guardian, Aunt Eller, said the independence and strength of the women’s roles was a pleasant surprise for her. Aunt Eller is an older woman making it on her own in a rough and potentially dangerous setting. “She’s tough on everyone, but she has a softer side with Laurey.”

In addition to becoming comfortable with their roles, the students also are diving into the show’s songs and dances.

“It’s really tough and exciting at the same time,” Stewart said. “There’s a lot to learn.”

The production also features more dance than the high school typically includes in its spring musicals.

“There’s a ton of dance in this show,” said villager Jaimie Wilke, who is serving as head choreographer. “In many of the songs, there’s a song within a song that’s a dance number.”

The students’ dance experience ranges from beginner to seasoned performer. A number are long-time students of the Gary Geis School of Dance in Springfield, and at least one is a member of the Gary Geis Dance Company, Wilke said. Lead dancer Christina Burks will perform en pointe as “Dream Laurey” in the 15-minute dance sequence that concludes act one.

Wilke said that dance students spend a significant amount of time working and training in the studio, but their skills and talents go mostly unseen by their school peers. The Yellow Springs production of “Oklahoma!” is giving those students an opportunity to showcase their abilities.

“That’s one reason I’ve been so excited,” she said.

Wilke said she is modeling the local show’s dances on the work of Agnes de Mille, who choreographed the original Broadway production.

The scope of the production — acting, singing, dancing — is significant, director Knapp said. While about 45 young people will be performing on stage, another 10 to 15 will be working in the crew as creative and technical support.

“To have 60 kids out of a couple hundred (in the school’s student body), that’s a big chunk,” Knapp said.

There will be a pit orchestra as well.

If all goes as hoped, the show’s final musical number, the eponymous “Oklahoma!” will be a knock out. Like the show itself, there’s more to it than may first appear.

“The song is really complicated,” Stewart (Aunt Eller) said. “It’s in eight-part harmony. If we get it down, it will be really cool.”

The Yellow Springs High School production of Rodgers and Hammerstein’s “Oklahoma!” will be presented over two weekends later this month. Performances will be at the Foundry Theater; showtimes are 8 p.m. Fridays and Saturdays, April 21–22 and 28–29, and 2 p.m. Sundays, April 23 and 30.