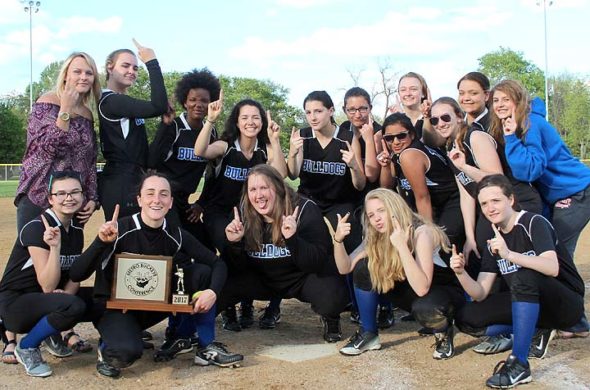 Softball
At the beginning of the season, the veteran Yellow Springs softball team had one goal in mind — to win the first ever Metro Buckeye Conference softball title for the school. And fulfill that goal they did. For the first time in Bulldog history, the softball team is the MBC champ. And not only did the Bulldogs clinch first place, but their recent victories also made for an undefeated MBC season.

Last week was showdown week for the Bulldogs, as they needed to win both their home and away games against Middletown Christian for the championship. Despite the stakes and balancing the tightrope of excitement and concentration, the Yellow Springs team was ready for the challenge. The teams’ prowess led to victory in both games, 15–2 and 13–3.

The first game was on the road at Middletown Christian. The Bulldogs immediately pounced on their opponent and scored six runs in the first inning. Lead speedster Kadie Lafferty got on base to start the game and quickly stole second. Kumbusky, Hannah Morrison, Gracie Price, and Danny Horton all had RBI singles to give the team its substantial early lead.

The Bulldogs put the game away in the fifth inning when they scored four runs following hits by Kelsie Lemons, Price and Kumbusky. Pitcher Morrison gave up two runs in the first inning but then dominated the rest of the game: she struck out 10 batters in five innings, and allowed only one run.

The 15–2 road win put the Bulldogs in a tie for first place in the MBC. But in order to finish as undefeated MBC champs and retain sole possession of the coveted top spot, the team had to win a rematch home game against Middletown Christian.

The second win wasn’t as easy. Coach DeLong said he felt that the girls came out “a little over-confident” for the rematch. They quickly realized they were in a tough game, as the score was tied 2–2 in the second inning. But the Bulldogs’ Victoria Willis worked defense and had a couple of outstanding catches in centerfield before getting on base, which set off a three-run rally. Victoria Willis, Lafferty and Morrison all scored for the Bulldogs. Following these three runs, the Bulldogs never trailed again, scoring six runs in the last inning to pull away for the final 13–3 win, crowning them MBC champs.

It was the first MBC title for the school and the first title for coach Delong. “In my six years of coaching, the program has gone from ‘worst to first,’” he said. “It’s very satisfying to see the girls achieve our preseason goals. They earned it. We have no weaknesses. Our hitting, pitching, catching, and defense were all primed to have this type of year, and to see the girls execute and achieve our goal is as good a feeling as a coach could have.”

Baseball
The boys baseball team is getting up to speed and making strides to make the fundamentals of the sport a mechanical, intuitive response. Coach Brandon Bresler, who stepped up from assistant to Bulldog head coach this year, said that the team has the potential to be as good as any in the league if they can get a handle on becoming one with the game. The game doesn’t necessarily come quite as naturally to YSHS players as it does to other teams, Bresler said, which results in the small errors that accumulate to cost the team games.

The universe ruled against a double-header on Saturday, raining out two home games scheduled against Dunbar and Thurgood Marshall. The Bulldogs picked it back up on Monday, when they travelled to Southeastern High School to play against the Trojans, who they’ll soon be playing again in the upcoming conference tournament. The fact that they were up against a team they’d be playing in the tournament psyched the Bulldogs out, Bresler said, leading to a startling 19–0 loss.

The team is currently 1–7 in the conference and 2–18 overall.

Track and Field
The Bulldogs split their squad on Friday to compete at meets in Mechanicsburg and Waynesville, but the severe lightning and heavy rains were widespread enough to cancel a significant number of events at both meets. However, the Bulldogs had a good showing in events that were able to be completed.

Amani Wagner set school records at the Wayne meet in both the discus and shot put. Primarily competing against Division I schools, Wagner finished in eighth place in the discus with a record-breaking toss of 114´10˝, though it was also Wagner who set the previous record earlier this spring. She followed up this performance with another school record in shot put, heaving the metal ball 33´10.25˝. The previous record was set by teammate Jasmine Davidson. Both Wagner and Davidson finished in the top 15 out of 70 throwers in the shot put.

Meanwhile, in Mechanicsburg, the Bulldogs earned three second-place finishes before the competition was suspended. The first second was earned by Payden Kegley, who competed in the pole vault for the first time this year and cleared 6´6˝, while the 400-meter relay team of Christina Banks, Stacia Strodes, Ayanna Madison and True Hall earned another second by finishing the race in 55.7 seconds. On the boys’ side, the 3200-meter relay team of Raven Campbell, Zach Lugo, Elliot Smithberger and Sam Wildenhaus sped to a season best time of 9:17 and earned the team’s final second-place finish. Elliot Smithberger teamed with Joe Plumer to finish in third place in the Long Jump.

“Our efforts this past weekend serve as a measuring stick as we ready ourselves for season-ending meets,” said coach John Gudgel.

One of those season-ending meets is the only home meet of the year. The Bulldogs will welcome 10 schools to Yellow Springs for the annual Bulldog Invitational on Friday. The girls are defending champs while the boys hope to improve on their fourth-place finish from last year. The meet will also feature the annual senior recognition ceremony.