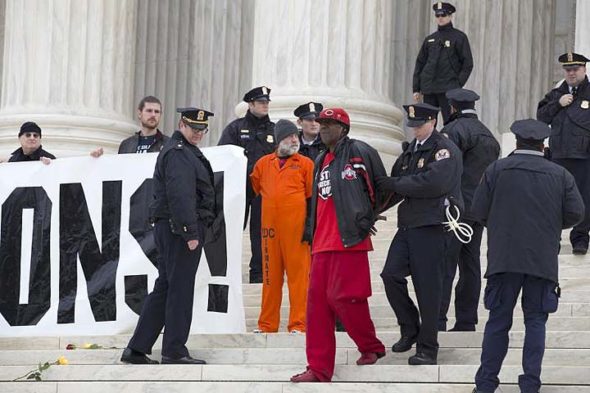 Derrick Jamison of Middletown is one of the exonerated former death row prisoners to speak at this Saturday's open house on the death penalty. He's shown in January of this year after being arrested at the U.S. Supreme Court during a protest against the death penalty. (Photo courtesy of JP Keenan/sojo.net)

An open house for those interested in, and concerned about, the death penalty in Ohio will take place this Saturday, May 6, from 5 to 6:30 p.m. at the home of Dayton attorney Jon Paul Rion, 400 N. Enon Road northwest of Yellow Springs. The event is sponsored by Ohioans to Stop Executions, a state group located in Columbus. Rion is on the board of the group.

The event is an opportunity to educate interested persons in current state legislation around the death penalty issue, according to OTSE Director Kevin Werner in an interview last week. Especially important is a bill that would not allow a death penalty sentence for those with serious mental illness.

“This is a reform that we’re optimistic we can get done in 2017,” Werner said. “We want to share what people can do to help make this a reality.”

A documentary on the death penalty will also be shown, and several former death row inmates who have since been exonerated will speak.

Those interested in attending the event can RSVP at eschutz@otse.org. Donations will also be accepted at the event.

See the May 4 News for a more detailed story on the event and the Ohio death penalty.