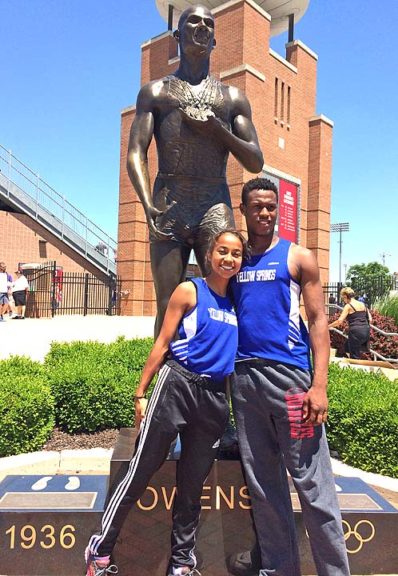 Senior Julian Roberts and junior James Browning competed at the state track and field championships on June 2 and 3 at The Ohio State University. Browning finished 13th in the high jump, while Roberts finished fourth in the 300 hurdles. (Submitted photo)

Buoyed on by a strong contingent of fans from Yellow Springs, Julian Roberts ran to a fourth-place finish in the 300 hurdles at the 43rd Girls Ohio High School Division III State Track Championships on June 3, hosted at The Ohio State University. She finished with a time of 45.64 seconds. Roberts was the first YSHS female to score at the state championship meet since 2000.

“Julian will go down in YSHS history as the top-ever performer in the 300 hurdles,” said coach John Gudgel.

Making his first-ever appearance at the state championship meet on June 2, junior James Browning jumped to a 13th place in the high jump with a leap of 6´0. Browning earned a certificate for his participation. He is the seventh Bulldog in YSHS history to compete in the boy’s high jump and the third Bulldog in the past four years to jump at the state meet.
“We are proud of both James and Julian for achieving this rare feat and overcoming outstanding odds in reaching the state meet,” Gudgel said.