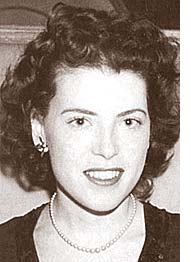 Patricia Ann O’Toole Laughlin, a 63-year resident of Williston Park, N.Y., died unexpectedly on May 19, 2017, while visiting her son Sean and his family in Peachtree City, Ga. Pat was born March 8, 1925, to Terrence and Marguerite (nee Lovell) O’Toole. She lost her father, at the tender age of 3, to an illness resulting from mustard gas poisoning during WWI. At age 9, she lost her beloved older sister, Rosemary, who succumbed at age 14 to complications of dental surgery.

Pat grew up in Jamaica, N.Y., in a time when vendors and tradesmen were still plying their wares in horse-drawn carts. Pat recalled running after the ice-man on a hot summer’s day to pick up cooling ice chips. On snowy days, she would sleigh ride with her brother Jerry on the grounds of the Ottilie Orphan Home, all the way down to Hillside Avenue.

In grammar school, Pat rode the street car every day to Our Lady Queen of Martyrs School in Forest Hills, and once — at age 8 — walked all the way home because she lost her nickel for the street car. She graduated from Bishop McDonnell High School in Fort Greene, Brooklyn, in June of 1942. While in high school, she traveled to Prospect Park to take riding lessons and, over the years, became an accomplished horsewoman, winning ribbons and medals for her equestrian talents — which were later confirmed, over 30 years later, to the surprise of her children, when she galloped after her daughter Pegeen’s runaway horse and reined it in.

Immediately after high school graduation, Pat went to work as a keypunch operator at Metropolitan Life Insurance Company in New York City. One of her enduring memories was of V-J Day, Aug. 14, 1945. The Met Life offices overlooked Park Avenue, where throngs were celebrating the end of the war. Pat and her co-workers participated in the celebration by opening the windows and turning the contents of their desktops into ticker-tape.

Pat was an enthusiastic and accomplished dancer and put those skills to use as a hostess at USO dances during WWII. She met her beloved Johnny, recently returned from service in the South Pacific, when he sold her a ticket to a church dance. At that Sadie Hawkins dance, Pat “sprung John from the pokey” three times. According to the rules, in order to bail Johnny out, they had to “get married.”

John and Pat tied the knot officially on Nov. 26, 1949, at our Lady of the Cenacle in Jamaica. Between 1951 and 1964, they welcomed six children, Terrence, Stephen, Moira, Pegeen, Sean, and Tara, who were all well blessed and prayed for by “Pope Pat.”

Pat’s culinary skills were legendary and her table was always open to friends who wandered home with the Laughlin children, drawn by the scent of her scratch-made spaghetti sauce and “the world’s best meatballs” every Wednesday afternoon. It was recently calculated that she prepared some 60,000 meals for her family between 1949 and 2012.

Pat was a devoted member of St Aidan’s parish for 63 years and served as president of the Mother’s Club and Rosary Altar Society. She attended Mass virtually every day, driving her son’s truck to church on the last Sunday of her life.

As an accomplished and prodigious seamstress, knitter and crocheter, Pat produced clothing for her children, blankets and prayer shawls. She was an equally prolific reader to the end of her life.

Pat returned to school in the 1970s to earn an associates’ degree as a medical assistant. She worked for 20 years in that field and was president of the Nassau County chapter of the American Association of Medical Assistants.

A Mass of Christian Burial was celebrated at St. Aidan Church in Williston Park, followed by interment at Holy Rood Cemetery in Westbury, NY. In lieu of flowers, donations may be made to Catholic Charities.

Pat loved to travel, and made friends wherever she went. She will be greatly missed.