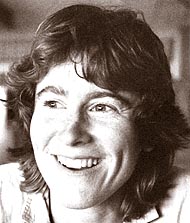 Kathryn Ann Black passed away surrounded by her loving family in Oakland, Calif. on Sept. 1, 2017. Kathryn (known to Antioch and Yellow Springs as “Kathy” or “KB”) came to Yellow Springs from Palo Alto, Calif., to attend Antioch College, and graduated in 1981. Kathy was known for her genuine interest in others and a warm smile that uplifted those around her. During her time at Antioch, she was very active in the Antioch Environmental Studies Department and the Antioch Farm, located in the South Glen at that time. She co-led a group of Antioch students on an Environmental Field Program. She participated in and helped to facilitate several other adventures by canoe and bicycle. She was also involved in Antioch Communications Studies and was often seen around campus and town with a (at that time big and heavy) video camera on her shoulder.

After graduation, Kathy remained in Yellow Springs working at Wright State University as equipment manager in the Motion Pictures Department. She continued to develop close friends here until in 1989 she returned to the Bay Area of California to be a nanny to her sister’s three children, including young twins.

KB had been injured in a biking accident at the age of 17, resulting in her left leg being amputated below the knee. Although this was a constant challenge for her she eagerly continued to engage in recreational and sporting activities.

With keen athletic skill, enthusiasm, and determination, Kathryn became a member of the Bay City Meteorites, a wheelchair basketball team that won a national championship in 1990. She was also a dedicated supporter of the Bay Area Outreach Program, or BORP, which advances the lives of people with physical disabilities through sports and recreational activities.

KB earned her master’s degree at San Jose State University and worked for 20 years as a pediatric occupational therapist. Her skill and genuine caring for her young patients was attested to by patients and their families at a beautiful Oakland memorial held for Kathryn on Sept. 30.

Kathryn met her life partner Nancy Henderson in 1990, and they married in 2013. She was a loving, creative, energetic mother to her daughter Skylar, now 16.

KB was diagnosed with a rare form of Sarcoma and passed away despite her determined spirit, very intensive treatment and caring efforts by family and friends.

Kathryn is survived by her wife, Nancy Henderson; their daughter, Skylar Black; mother Dorothy Black; siblings Marcia, Gordon and Charles Black; and many other loving family members and friends in Yellow Springs and around the U.S. Her father, John “Jack” Black, preceded her in death in 1993.

The family has asked that any donations in memory of Kathryn be sent in her name to Bay Area Outdoor Education Program (BORP) or to the Sarcoma Foundation of America.