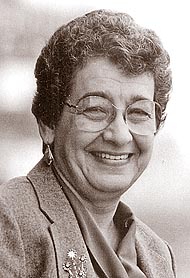 Shirley (Shirl) Ann Woodrick LeVesconte died on Sept. 30, 2017, in her home in Yellow Springs, surrounded by her children. Shirl was born in Grand Rapids, Michigan on July 16, 1929, the first child of Irma and Carl Woodrick. Carl was a first generation auto factory worker who rose through the ranks to become a foreman at the Grand Rapids General Motors assembly plant. Irma was an avid reader, scrabble player, baseball aficionado and homemaker extraordinaire.

Shirl was the first person in her family to attend college. She began her college career at Olivet, where she studied under the brilliant economist, Tucker P. Smith. At that time, Olivet was embroiled in an agitated controversy regarding educational freedom. This experience was a profound turning point in Shirl’s views on politics, economics and culture. Also at Olivet, Shirl met and became engaged to her future husband, Harold J. LeVesconte. Shirl and Harold married in 1949. They had three children: Kate, Steve and Thaleia.

Shirl moved with Harold through his evolution from Congregational to Unitarian ministries in Illinois and then Ohio, landing in Dayton in 1960 when Harold became minister of the First Unitarian Church. She entered civic life in Dayton, becoming active in and then president of the Dayton View Neighborhood Council during a period of raucous racial strife as Dayton View transitioned from being an all-white to a predominantly African-American neighborhood.

Shirl’s education had been interrupted by the arrival of her children. In Dayton, she again pursued her education at Wright State University, achieving her bachelor’s degree in psychology in 1974 and her master’s degree in applied behavioral science in 1984. Shirl’s master’s thesis, “The Effect of Brief Training on Sex-Related Differences in Visual-Spatial Skill,” was published with her friend and professor Anne Stericker and is still referenced in research. Her study found that the difference between men’s and women’s spatial abilities could be largely attributed to exposure. When given training, she found, women’s spatial abilities developed rapidly and maintained over time. Shirl was fond of saying that blocks stacked better than dolls.

In terms of work, however, Shirl was most proud of the things she accomplished as the executive director of Dwelling Place, Inc., a not-for-profit organization in Grand Rapids, Mich. During the time she worked there, Dwelling Place sheltered over 1,100 homeless people. Shirl helped Dwelling Place to make many positive changes. One challenge she faced was that the organization was over a million dollars in debt – something that had not been known at the time she was hired. During her tenure there, she was able to both increase the services the agency offered and bring the agency out of debt. What brought her the most satisfaction, however, was the work she did to change the culture of the agency from its previous method of top-down functioning to a more truly bottom-up, open, democratic institution. She often told the story of a first employee meeting at which she informed the staff that they would need to participate in discussions about what the agency needed to work on to improve services and functioning. She related that five minutes of silence can seem like a very long time, but that it can also be very effective.

After her retirement, Shirl moved to Yellow Springs in 1994 at the urging of her daughter, Kate. Here she became an active and involved community member. She served on the board of the Yellow Springs Senior Center, was a very hands-on grandmother, became a passionate and accomplished potter and remained a formidable bridge player.

Shirl was preceded in death by her ex-husband, Harold LeVesconte. She leaves behind her younger brothers: Bob, Larry and John Woodrick; her children: Kate, Steve and Thaleia LeVesconte; her son-in-law Steve McColaugh, and grandchildren: Chris, Will, Sarah, and Jesse LeVesconte. She will be remembered fondly by many.