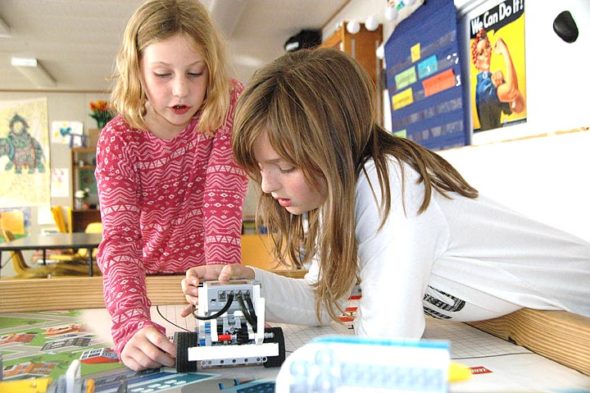 Mills Lawn fourth-graders Malayna Buster, left, and Hannah Parker adjust a robot named Bratwurst, which they helped program as part of their FIRST Lego League after-school team. The girls are members of one of two local 10-member teams that will be competing in a regional tournament Sunday, Dec. 10, being hosted by YS High School junior Alex Ronnebaum at the high school. (photo by Carol Simmons)

Robots inspire a passion for STEM

When high school junior Alex Ronnebaum came to Yellow Springs schools as an eighth-grader, she was already a veteran of the FIRST League robotics program.

A nonprofit educational initiative founded in 1989 in New Hampshire, FIRST (For Inspiration and Recognition of Science and Technology) seeks to inspire and engage young people in scientific and technological pursuits, specifically through the design and construction of robots to solve particular problems. The culmination of an annual challenge is a series of tournaments in which student-led teams compete.

As a second-grader in Beavercreek, Ronnebaum simply responded to a flier announcing a “robot club.” What she’s found in the years since, most recently as part of a community team that meets in Dayton, “has truly transformed me as a person,” she said in a recent interview.
And she wants to share that experience with Yellow Springs students and the wider community. Toward that end, she is hosting a regional tournament at Yellow Springs High School on Sunday, Dec. 10, for area teams in grades 4–9.

The competition will be one of several in Greene and Montgomery counties during early December that will send a handful of finalists to a district tournament in mid-January at Wright State University. Ohio’s state finals follow in February, with winners going on to compete nationally.

The fourth- through ninth-grade program, which uses Lego building blocks for robot construction, is one of four age levels in the FIRST universe, which runs from 6–18 years of age.

Locally, two 10-member teams, both at Mills Lawn, have been gearing up for the December contest.

One team is coached by fifth-grade teacher Maggie Davis, while the other is coached by Mills Lawn parent Chris Hamilton. Students, however, are expected to do all of the work.

Both teams have been meeting after school several days a week since school began.

This year’s challenge, released by the head organization in August, focuses on hydro dynamics — or more simply, water. Students have been asked to identify a problem within the human water cycle; design a solution that makes the problem better; and share the problem and solution with others.

“We want to create something that hasn’t been made before,” Davis said during a recent meeting with her team of fourth through sixth graders.

The students have taken the challenge to heart, choosing to focus on the problem of making clean water available amidst third-world conditions. Their goal is to devise a water filter system that can be made and maintained easily and cheaply with available resources.

“We want to help countries who don’t have access to clean water,” fourth-grader Hannah Parker said.

While half of the students worked on programming their robots — which they’ve named Bratwurst, Frankfurter and Metawurst — the other half sat at laptop computers and researched filtration system needs and materials that might be readily on hand when resources are limited.

“I found something that says you can use a plastic bottle instead of a plastic bag,” sixth-grader Ciara Scarver said, as the group brainstormed possible approaches and solutions to their problem.

“We need to figure out if third-world countries have access to these,” coach Davis said.
The robotic piece of the challenge requires students to program the device to maneuver a variety of water-related obstacles and tasks that are set up on a large, pre-determined competition table. The tasks include flushing a toilet, reconnecting a water line and releasing water from an elevated container.

At the school’s practice table, fifth-grader Cole Oberg noted to his teammates that there was an important difference between the “rotation” of the robot’s wheels and the robot itself. Being specific about what kind of turn is needed is vital when programming.

Hannah Parker and friend Malayna Buster were working on a toilet-related task, Hannah said. “The robot will be pushing against a post.” Getting the device first to turn and then make contact at the exact right spot is crucial.

Malayna said she enjoys the trial-and-error aspect of solving the problem.

If something doesn’t work, “you get to try again,” she said.

“It’s fun,” Cole agreed. “And when everything works well, it’s really satisfying.”
That engagement is exactly what high-schooler Ronnebaum wanted to inspire in hosting the locally based tournament.

She said that a lot of energy and interest in Yellow Springs is devoted to the arts, and while she appreciates artistic endeavors, she would like to see a similar focus on the sciences. She noted that there is a creative aspect that often goes unrecognized.
She’s hoping that community members will come to the Dec. 10 competition to see what the students have created and cheer on the local team. The robotic portion of the day-long event starts at noon, she said.

Twenty-four teams from across the area are scheduled to compete. They’re judged not only by the success of their robots, but also by the results of their research, the creativity of a presentation they give in the morning on their findings and the collegiality with which they work together and treat other teams.

This is the second year in a row that Mills Lawn has taken part in regional competition, though the school participated briefly in the FIRST Lego League program about 15 years ago.
Ronnebaum said the tournament is exciting, but the most important part of the program is the learning and discovery that occurs along the way. “It’s always good to see a team happy with what they did,” even if not a finalist.

A part of the worldwide competition is the designation of a global innovation award, where a team’s solution to a problem “is deemed so great,” the FIRST organization will see it to fruition. Ronnebaum said an Ohio team won the award in recent years, having devised a way to decompose styrofoam and use it to purify water.

“The passion that’s in these children is just amazing,” Ronnebaum said. “It’s just crazy to see what some of these kids come up with.”

Ronnebaum, who also plays on the Yellow Springs varsity volleyball team, said she has always been interested in STEM (science, technology, engineering and math) subjects, and she hopes to foster a similar interest in younger students.

“I’ve never met a kid who got excited by a math worksheet,” she said. But in the FIRST program, “you’re solving problems, which is what you do in the real world.”