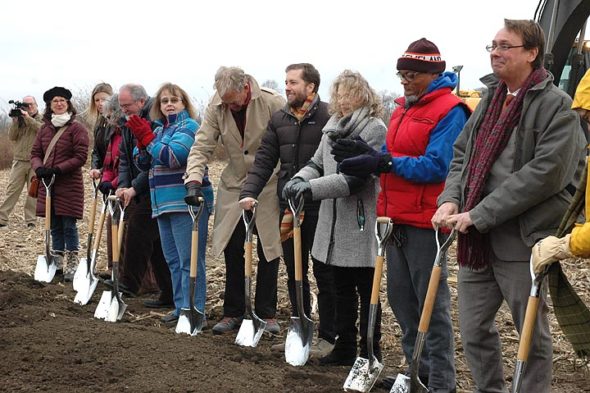 In December, Village leaders and Cresco Labs President Charlie Bachtell, fourth from right, broke ground for the company's planned facility for the cultivation of medical marijuana, located in the land known as the Center for Business and Education, or CBE. On Tuesday, Jan. 23, the Village and Cresco closed on the sale of the eight acres of land.

The Village of Yellow Springs and Cresco Labs Ohio, LLC, closed on Tuesday, Jan. 23, on 8.226 acres of land located in the former Center for Business and Education, or CBE, on the western edge of the village. The closing allows Cresco to pursue its goal of being “the first company to offer medical marijuana for sale in the State of Ohio,” according to a Jan. 24 press release from Village Manager Patti Bates.

In December, Cresco won one of 12 large-scale grow licenses for medical marijuana from the state of Ohio. It intends to build on the land a  facility for both cultivating and processing medical marijuana, to be ready in the spring.

According to the press statement, “Cresco brings a high level of community responsibility with it to Yellow Springs.” The company has projected that it will hire 65 people initially, with the possibility of more later, and that those employees will donate 40 hours of community service to Yellow Springs each quarter. The buildings and operations will be environmentally friendly, the press release states, and Cresco has funded the construction of a road and infrastructure on the site. The company has also promised that a portion of its net profits will be donated to the Village on an annual basis.

“We are excited to welcome Cresco to the Village as a community partner and asset,” Bates stated in the press release.