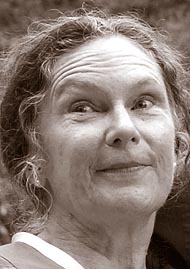 Gail was born in Allendale, NJ on January 17, 1942, the daughter of Lewis and Meryle Bowen Kort. Her parents had met at the Art Students League of New York, and they encouraged her interest in art. Her high school commissioned her to make a large stone sculpture to place by its entrance. She studied art at Oberlin College, graduating in 1964.

Gail lived in Spain for four years while her first husband, Craig Packard, was stationed at the US Naval base in Rota. She taught art classes for naval officers and spouses, and her eldest son was born there. She then lived in Columbus, Ohio, with a year in Belgrade, Yugoslavia when her husband had a Fulbright fellowship. Gail had enjoyed international
folk dancing since high school, and in Belgrade, she became a member of a Yugoslav performing folk-dance group. While in Columbus, she made pen-and-ink drawings of Victorian houses, which its Victorian Village Society published in an annual calendar.

In 1978, Gail married David Hemmendinger, who shared her interest in folk dancing. They lived in Yellow Springs, Ohio, where Gail continued to draw house portraits by commission and to paint large landscapes. She was a founding member of the Village Artisans collective gallery there. She always worked on site, saying that cameras see in a way very different from how the eye and the mind do. She loved the sky, and over the years, it occupied more and more of each canvas, with some that she called, “Just Sky”. Gail moved to Schenectady, NY in 1989 when David came to Union College, and continued to paint. She particularly loved the view from the Thacher Park Overlook in the Helderbergs, where she painted landscapes in all seasons; she also painted many other local scenes. Gail enjoyed traveling with David in Europe, Turkey, Morocco, and the Caribbean, as well as in the US, and she painted and drew during her travels, particularly in France and in St. John, USVI.

Gail was a member of the Schenectady Oakroom Artists for many years, and exhibited her work in their shows. Her paintings were also in several of the shows of Artists of the Mohawk-Hudson Region and in other local galleries and art shows. She worked as a substitute teacher in Niskayuna, where she brought what she called “her bag of tricks”, demonstrations of color and optical phenomena. Some of her later works were landscapes painted on the inner surface of domes, to show people what a landscape view was like when painted on a curved surface rather than on a flat canvas, continuing to explore the relation between how we see and how we represent what we see. She described painting on site as a dialogue between what’s “out there” and the right-here of her dabs of paint.

Gail loved being outdoors, and enjoyed gardening. She was a warm and loving person, intensely curious about others and how they saw the world. Her enthusiasm was radiant and contagious, and she loved to see others open up and laugh. People found it easy to talk to her. Her humor was sometimes quiet but always there, even in the choices she made about what to put on canvas. She wrote, “I combine energy and intense observation to reflect the love I have for what I contemplate.”

Gail underwent treatment for lymphoma for over six years, and her good spirits, optimism, and determination persisted throughout. She continued to enjoy life, and particularly, to be with her sons and grandchildren. Her family is very grateful to all her friends who helped to provide support over the years, as well as to the staff at Ellis Hospital.

A memorial service will be held March 10th, 2018, at the Unitarian Universalist Society of Schenectady, 1221 Wendell Ave., Schenectady, NY 12308. In lieu of flowers, Gail’s friends are invited to contribute to one of the charities that she valued, Planned Parenthood or Amnesty International.