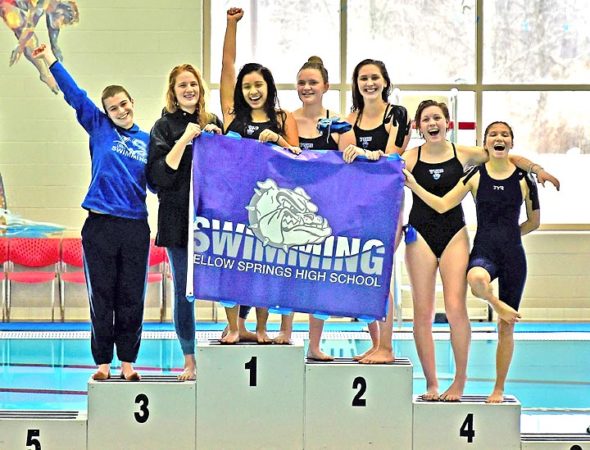 The YSHS girls swam to their third straight Metro Buckeye Conference Championship this year, capturing first place in an astounding six out of the 11 events. Pictured here are members of the winning team, including, from left, Ellery Bledsoe, Aza Hurwitz, Sara Zendlovitz, Madison Werner, Eden Spriggs, Natalie Galarza and Jude Meekin. All finished in the top eight in their individual events, with team captains Spriggs and Meekin winning all of their individual events. The girls 200 medley relay and 400 free relay also won, with the 400 free relay team setting a new MBC record. (Submitted photo by Kathleen Galarza)

The Yellow Springs High School Bulldogs swim team once again showed dominance in the annual Metro Buckeye Conference Championships this year, with the girls team winning its third straight conference title. With a smaller squad than in past seasons and outnumbered by more than two to one by rivals, every race mattered, and the team showed up in a big way. The girls team captured first place in an astounding six out of the 11 events.

The boys team faced off against the highest quality swimmers the conference has seen in many years, with a few state level qualifiers in the ranks.  Despite that, Captain David Walker finished third in both the 200 IM and 100 Fly.  Sophomore Jackson Bleything came in sixth in the 200 IM and 7th in the 100 Breaststroke. Sophomore Mason Lindsey came in 8th in the 100 Breaststroke and blew away his heat in the 50 Free, breaking the 30 second barrier for the first time.  The 200 and 400 Free Relays consisting of Harper Mesure, Walker, Bleything and Lindsey came in fourth and fifth, respectively.

The seniors were recognized at the meet and also at the YSHS Girls Basketball game on Monday, Feb. 5. Moving forward, the boys team will compete in the Sectionals Meet Friday, Feb. 9, starting at 6:30 p.m. at the Washington Township Recreation Center.  The girls team will travel down to the Cincinnati area for Sectionals the morning of Saturday, Feb. 10, starting at 9:30 a.m. at Mason High School.

The swim teams seniors were celebrated at the girls basketball home game against Bethel. Seniors Ellery Bledsoe and Aza Hurwitz were presented with their senior posters and were cheered by the home crowd. 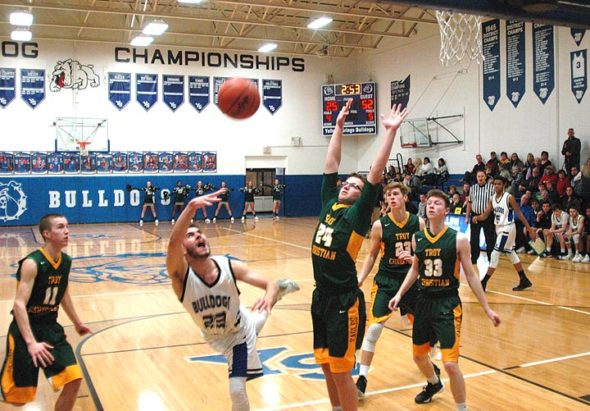 The boys basketball team split their week, going 1–1 against Jefferson and Troy Christian. Troy Christian bested the boys in every quarter taking the win 55–29.

The Bulldogs bounced back against Jefferson the next day with a dominant 79–49 win. The thirty point margin of victory was their best of the season. They play next at Dayton Christian on Saturday.

The Lady Bulldogs went 1–2 on the week playing tough teams in Troy Christian and Bethel. They kicked off their week with a loss to Troy Christian, 53–18. Gracie Price led the scoring from the bench with 8 points on 3 of 11 shooting while hitting two three pointers. Amani Wagner had 14 rebounds. The girls then beat Jefferson, 56–29, led by sophomore Tyler Linkhart’s 14 points and 21 rebounds, including 10 offensive rebounds. Seniors Amani Wagner and Dede Cheatom had 10 and 15 rebounds respectively.

The girls then played Bethel at home in the senior night game. Pregame, seniors Ayanna Madison, Amani Wagner, Gracie Price, Dede Cheatom, Jasmine Davidson and Elle Peifer were celebrated. These girls have contributed much to the school’s basketball program and they will be very missed. The final score was an unfortunate loss, 59–40.