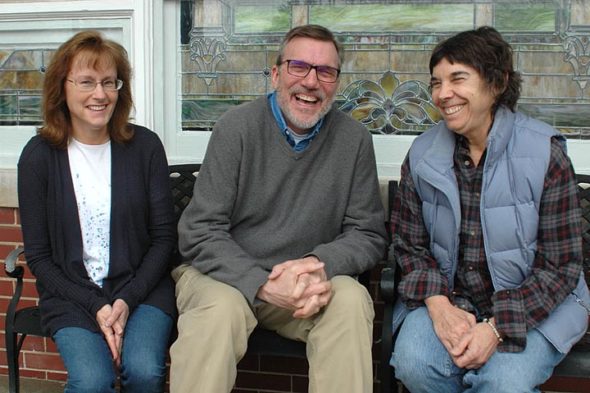 A new volunteer initiative called PORCH aims to collect food items from villagers’ homes to donate to the Yellow Springs Community Food Pantry. The local PORCH effort is organized by Libby Hammond, left, with support from Pastor Rick Jones, of United Methodist Church, where the pantry is located, and the pantry’s director, Paula Hurwitz. (Photo by Audrey Hackett)

Food aid, from PORCH to pantry

The Yellow Springs Community Food Pantry is about to get a boost, thanks to a new project called PORCH and the efforts of local resident Libby Hammond.

This Monday, Feb. 5, Hammond and food pantry volunteer Susan Bothwell will pick up donated items from six Yellow Springs locations — five residences and one business — and bring them to the pantry in the basement of United Methodist Church. Added to the pantry’s provisions of canned and other goods, the items will end up in the hands, and on the tables, of local residents in need.

“It’s just so simple,” Hammond said in a recent  interview.

This month’s PORCH pickup is the first of what Hammond hopes are many monthly pickups from local residents, all destined for the YS Community Food Pantry. People can already donate to the food pantry by taking items to the church directly, or depositing canned goods in the donation bins at Tom’s Market or the Bryan Center. The difference with the new initiative is that Hammond and other volunteers will go directly to a person’s house to pick up donated items. Pickups take place the first Monday of the month between 10 a.m. and noon, by prior arrangement with Hammond. The donor doesn’t need to be home; items can be set out on porches or other sheltered areas, hence the name PORCH.

“We come to you,” Hammond said.

Another difference with PORCH is that specific items are being sought — in-demand items that the local pantry goes through quickly. Currently, these items include canned fruit, cereal, peanut butter, coffee, toilet paper and feminine hygiene products. People who donate to the pantry through PORCH pickups are asked to contribute some or all of those specific goods, according to Hammond.

“I’m so grateful Libby’s doing this,” she said.

People often want to donate, but aren’t sure how, or aren’t available during the church’s open hours, Hurwitz explained. And while large food drives over the winter holidays typically keep the pantry stocked well into spring, new items are always welcome and needed.

Hunger and food insecurity are a year-round reality for some local people and families. Last year, the local pantry served 76 families, some on a regular basis, Hurwitz said. Open the second and fourth Thursday of the month from 2 to 4 p.m. in the basement of United Methodist, 202 S. Winter Street, the pantry is designed to provide “supplemental food” to people in Yellow Springs and Clifton. The pantry asks for proof of residence, but not proof of need.

“You determine the need,” Hurwitz explained.

Other sources of food aid in town include the Little Free Pantry on the Walnut Street side of First Presbyterian Church and the Dayton Foodbank’s mobile pantry, which visits the village on the fourth Tuesday of the month at 1 p.m. in the Bryan Center parking lot.

PORCH is new to Yellow Springs, but is a proven program in other communities, according to PORCH co-founder Christine Cotton in a recent phone interview. The nonprofit food aid organization began in 2010 in Chapel Hill, N.C., when three friends — Cotton, Debbie Horwitz and Susan Romaine — realized that kids were showing up hungry at their children’s school.

“We had to try to do something about that,” Cotton said.

So the three friends asked other friends and neighbors to set out cans of tuna to be picked up by the women on a designated day and delivered to their community food pantry. Canned tuna was chosen because it was a priority item at the pantry, according to Cotton.

“It was easy, and it worked,” she said of the early effort. “We thought maybe we were onto something.”

The initiative grew from there. PORCH (which stands for People Offering Relief for Chapel Hill-Carrboro Homes) is now active in about 150 neighborhoods in Chapel Hill-Carrboro, adjacent communities with a population of over 70,000 people. And the all-volunteer organization has expanded to about 18 other communities in North Carolina and other states. Since 2010, PORCH has facilitated the donation of $2 million in food aid in Chapel Hill-Carrboro, and $3.5 million across all the communities in which it operates, according to Cotton. Yellow Springs is the second community to start up a PORCH initiative in Ohio, the first being Strongsville. Each new initiative is led by a point person within the community, usually a person who has seen the work of PORCH elsewhere and wants to bring the model home, Cotton said.

In Yellow Springs, Hammond is that person. She experienced PORCH firsthand last year when she visited her aunt and uncle in Chapel Hill. Her uncle is a PORCH volunteer, and during her visit Hammond tagged along on a Monday morning as he drove around to the addresses on his list, picking up food donations, then taking them to a local church for sorting and distribution. The process seemed easy, efficient and fun, and Hammond thought she could bring the idea to Yellow Springs.

“I love Yellow Springs and I know there’s need in our community,” she said. “I just thought, I can do this.”

And so she contacted Cotton, who serves as PORCH’s new member coordinator, for help starting a PORCH initiative in Yellow Springs. There are no fees associated with the affiliation. As part of the PORCH network, Yellow Springs follows the nonprofit’s model of neighborhood food pickup, and has access to a starter kit, marketing materials and other forms of practical support to get up and running, according to Hammond.

She also approached Hurwitz and Pastor Rick Jones of United Methodist, where Hammond is a member. “My pastor thought it was a wonderful idea,” Hammond said.

Jones said he sees PORCH as a way to extend the church’s “practical ministry,” which is focused on meeting people’s basic needs. And no need is more basic than food, he said.

“It’s a Biblical thing,” he explained. “It’s so important that people are fed and nourished.”

A longtime local resident who lives just outside Yellow Springs, Hammond has been involved in food pantry work for many years. She previously volunteered at the Xenia Fish Food Pantry, which serves all of Greene County, and was active at the Rainbow Table in Springfield, as well as volunteering at the Yellow Springs pantry several years ago.

“I’ve been helping people with food for a long time,” she said.

She and her husband, Jim Hammond, are co-owners of Mills Park Hotel. A former Fairborn High School math teacher, Libby Hammond serves as the finance manager for the hotel.

Though she’s just getting started, Hammond said she’s confident the idea will take off.

“I know the community will respond positively,” she said. “Yellow Springs is a very giving community.”