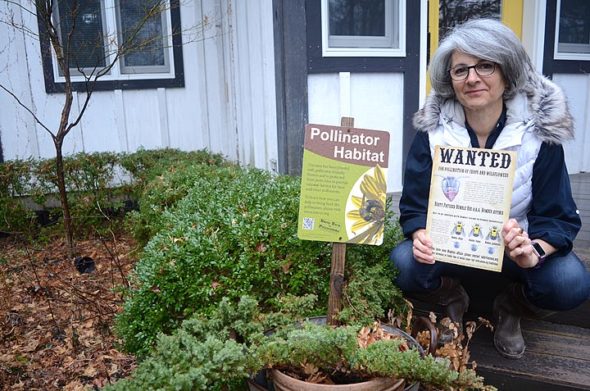 Nadia Malarkey is relaunching the Yellow Springs Pollinator Regeneration Project with a free talk on Wednesday, Feb. 7, at 7:30 p.m. at the Antioch University Midwest main auditorium. Malarkey, a landscape designer, will teach homeowners how to address the plight of pollinators with eco-friendly landscaping practices. (Photo by Megan Bachman)

This article is the first of two in a series. The second will explore the Village of Yellow Springs’ efforts to reduce pesticide use and the impacts of pesticides on human health.

The plight of the bumblebee is never far from Nadia Malarkey’s mind, whether  gardening at her West Whiteman Street home, designing properties around town for her landscaping business, or researching pesticide-free lawn care strategies for the Village of Yellow Springs as part of the Environmental Commission.

The bumblebee, a “keystone species” because of its crucial role in an ecosystem, is suffering the same fate as non-native honeybees — collapse with the possibility of extinction — and Malarkey is devoted to helping the humble bee, and other native pollinators.

“Bumblebees pollinate all the food that is necessary all the way up the food web, from the plants and berries to the bears and the hawks,” Malarkey explained this week. “If you remove native bumblebees,  it’s not long before ecosystem collapse.”

Locally, the use of chemical pesticides and synthetic fertilizers on lawns and landscapes is one culprit behind the decline of bumblebee populations, while the chemicals also harm human health and devastate soil microbial life, according to Malarkey.

If villagers stopped spraying herbicides and insecticides such as glyphosate, dicamba and 2,4–D, using “weed and seed” lawn formulas and contracting with chemical lawn care companies, and instead planted native flowering plants, the bumblebees, not to mention the monarch butterflies, would return, according to Malarkey. And the village would be a healthier, and safer, place to live.

A voice for the voiceless pollinators, Malarkey will speak Wednesday, Feb. 7, from 7:30 to 9 p.m. at the Antioch University Midwest main auditorium, on how villagers can create healthy, biodiverse ecosystems in their backyards using a whole-systems landscaping approach.

“This is about creating spaces that work for nature,” Malarkey said. “When you increase biodiversity on your lawn, you increase the health of the ecosystem.”

Malarkey will also share her personal journey of growing environmental awareness, a history of the ecological impact of the industrial revolution and suburbia and her hope for positive change.

“After the [presidential] election, I knew we had to work twice as hard to protect our village and our resources, because they are not on the agenda as something that’s important,” Malarkey said. “But let’s fight for something as opposed to against something.”

At the talk, Malarkey will relaunch her Yellow Springs Pollinator Regeneration Project, originally started in 2014 to teach homeowners how to attract pollinators to their properties. Volunteers who take the Pollinator Pledge agree to 1) not use any synthetic pesticides or fertilizers on their property, 2) plant a variety of flowering plants to provide pollen and 3) share what they learn with their neighbors. Malarkey will then create an interactive online map of pollinator-friendly properties so the community can chart its progress to becoming pesticide-free.

In conjunction with an existing commitment by the Village of Yellow Springs to use all-natural approaches to maintain  public land, the village has an opportunity to be a model community, Malarkey said.

“The village could be a leader in grassroots democracy as we make choices that protect the land that we all share and love,” Malarkey said.

Malarkey’s talk is the first of three events this winter hosted by the Environmental Commission and the Village of Yellow Springs aimed at educating local property owners, Village employees, area landscape professionals and municipal leaders in the region about how to transition to organic, chemical-free lawn, or turf, care.

The next event, Thursday, March 1, is an all-day workshop, from 8:30 a.m. to 3 p.m., at John Bryan Community Center Rooms A&B, on landscape management, “Transitioning to Organic Lawn Care.” Presenting at the workshop are horticulturalist and natural turf care expert Chip Osborne, from Maine, and Jay Feldman, executive director of the Washington, D.C.-based advocacy organization Beyond Pesticides. And that evening, from 7:30 to 9 p.m. at the Antioch University Midwest auditorium, Osborne and Feldman will give a talk to homeowners and others on both how and why to change lawn care practices.

Malarkey called Osborne “one of the top resources in the organic turf world,” while Feldman served on the National Organic Standards Board and is an expert on the threats to human and ecological health of common pesticides used by homeowners and lawn care companies.

Reached by phone this week, Feldman said that Yellow Springs is one of 15 communities across the country the national nonprofit is working with as part of a pilot program it hopes to replicate.

“Yellow Springs is one of the pioneers of a movement that has been growing in the country,” Feldman said. “These are towns who are concerned about the health of their residents and understand it’s better to take a precautionary approach when it comes to the use of toxic chemicals.”

According to Beyond Pesticides, of the 30 commonly used lawn pesticides, 16 are linked with cancer or carcinogenicity, 12 are linked with birth defects, 21 with reproductive effects, 25 with liver or kidney damage, 14 with neurotoxicity and 17 with disruption of the endocrine, or hormonal, system.

Already committed to participating are maintenance crew workers from the Village of Yellow Springs, which stopped using chemical pesticides four years ago after a misapplication incident at the Gaunt Park pool, and which now takes a chemical-free approach to the more than 200 acres of land it owns and maintains in and around the village.

According to Village Manager Patti Bates, though there is no municipal ordinance banning pesticides outright, the Village’s current goal is to maintain its properties “as natural and organic as possible.”

All three events are free and open to the public. But since there is only space for 55 people at the all-day workshop, those who wish to attend should RSVP ahead of time by emailing Bates at pbates@vil.yellowsprings.oh.us.

A 2013 pesticide controversy at the Gaunt Park pool, when Village workers  accidentally applied an herbicide containing 2,4–D and dicamba undiluted to the grassy area at the pool, put a fire under Malarkey, who saw an opportunity to raise awareness about the dangers of pesticides being used across the village.

“People were so irate about the application of pesticides at the pool but no one was thinking about the regular spraying in their neighborhoods,” Malarkey said.

A grassroots effort such as the Pollinator Regeneration Project is necessary because, according to Feldman, municipalities in 43 states — including Ohio — cannot pass a law more strict than state law when it comes to the use of pesticides on private property. That means Village Council couldn’t ban pesticide use village-wide.

However, pesticide use is a community issue, Feldman said, because pesticide residue can drift off-site into neighboring homes, infiltrate local groundwater, run off into surface waters, and be tracked into homes by people and pets where they are inhaled, among other pathways of exposure.

As for the effects on the ecosystem — and the bumblebees — of the most common 30 lawn pesticides, 19 are detected in groundwater, 20 have the ability to leach into drinking water sources, 30 are toxic to fish and other aquatic organisms, 29 are toxic to bees, 14 are toxic to mammals, and 22 are toxic to birds, according to Beyond Pesticides.

Because pesticides can’t discriminate between the intended or target pest and other, nontarget species, many invertebrates vital to a functioning ecosystem are threatened by pesticide use, according to the Xerces Society, a conservation group. The bumblebee is particularly vulnerable, because it is also competing with European honeybees imported to North America in the 17th century. According to the Xerces Society, more than one quarter of all North American bumblebees are facing some degree of extinction risk due to climate change, pesticides, habitat loss and disease transmitted from commercially reared bumblebees.

Because bumblebees have a small habitat — only traveling 500 feet compared to an average of two miles for a honeybee — they are particularly susceptible to pesticides, Malarkey said. That’s why Malarkey hopes to encourage homeowners to take simple steps to protect the bumblebee, and all life in the village, asking:

“Humans are not going away, so how are we going to protect this earth so we can live in harmony with the environment?”

An upcoming article will explore the Village of Yellow Springs’ efforts to reduce pesticide use and the impacts of pesticides on human health.