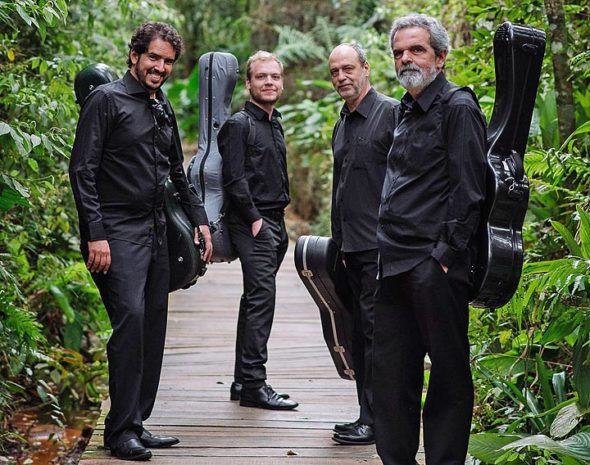 The Brazilian Guitar Quartet will perform Sunday, March 25, as part of the Chamber Music in Yellow Springs series. (Submitted photo)

On Sunday, March 25, Chamber Music in Yellow Springs will bring to the area one of the world’s leading guitar ensembles, the Brazilian Guitar Quartet. The concert will take place at 7:30 p.m. at the First Presbyterian Church. Miami Valley’s own Jim McCutcheon will give a preconcert lecture at 6:45 p.m.

The BGQ’s unique combination of regular six-string and extended-range, eight-string guitars allows it to bring audiences an original and unusual repertoire. It has performed at venues including the 92nd Street Y and the Metropolitan Museum in New York, Flagler Museum in Palm Beach, Dumbarton Concerts and National Gallery in Washington, D.C., Beethovensaal in Hanover, Germany, and festivals all over the world, to sold-out halls, ecstatic audience responses, and rave reviews: “The quartet played … engagingly and with a virtuosic flair” (The New York Times); “The Brazilians played with one mind … and conveyed all the mystery, joy, passion and pride in this music … this was magical music making” (Palm Beach Daily News).

At the inaugural World Guitar Congress in Baltimore in 2004, the quartet, with the Baltimore Symphony, gave the world premiere of a specially commissioned concerto by Brazil’s 2001 Composer of the Year, Ronaldo Miranda. In 2009, the quartet performed “Suite Iberia” by Isaac Albéniz in a Brazilian tour sponsored by Instituto Cervantes in honor of the 100th anniversary of the composer’s death.

The program in Yellow Springs will include two string quartets by Heitor Villa-Lobos and works by Ronaldo Miranda, Camargo Guarnieri, and Francisco Mignone. Tickets ($25 for adults, $7 for full-time students with ID) and further information can be found at http://www.cmys.org or 937-374-8800, or at the door.

CMYS’s final concert this season will be the Annual Competition for Emerging Professional Ensembles on April 29, this year at the new time of 4 p.m. CMYS is grateful for grant support from the Ohio Arts Council and the Yellow Springs Community Foundation.