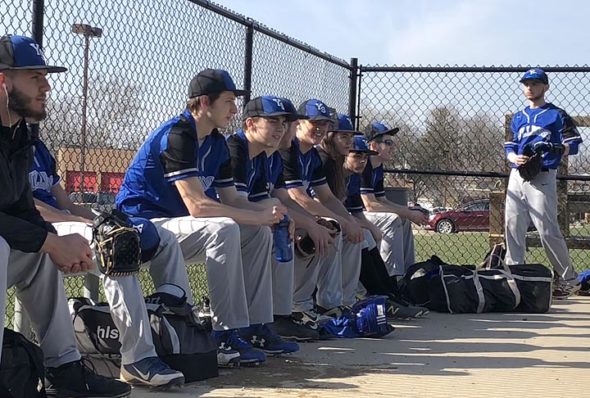 Members of the YSHS varsity baseball team are all smiles before the start of the April 12 game at Belmont High School. The Bulldogs would go on to win the game 13-5. Pictured left to right are Tony Marinelli, Dylan Rainey, Colton Bittner, Eric Romohr, Trey Anderson, Jasiah Zinger-Mitchell, Eli Cordell, Travis Scarfpin and Donnie Isenbarger. (Submitted photo by Eleanor Anderson)

Baseball has played a grueling schedule of late. The stretch kicked off with a rough loss at Cedarville on Wednesday, April 11, losing 11–4. Fielding errors and a lack of plate discipline allowed Cedarville to build a large lead and the Bulldogs couldn’t battle back.

The next day they had more luck. Away at Belmont, Dylan Rainey singled to start the game and stole second and third, eventually coming home to score on a Tony Marinelli single. Marinelli was on the mound and finished the game with eight strikeouts and a spectacular catch on a line drive to the pitcher. The boys stole a total of 10 bases and scored 13 runs to blow Belmont out 13–5.

The boys played their first conference game the day after at home against Legacy Christian. After a 1–2–3 first inning, the Bulldogs took advantage of their opponents’ mistakes with Marinelli and Eric Romohr both scoring after reaching base on an error and a walk, respectively. The scoring continued for the team that put up a respectable seven runs. However, the game belonged to junior Dylan Rainey, who pitched what could well be the best game of the year. Rainey amassed 14 strikeouts and allowed no earned runs as the boys dominated Legacy en route to a 7–1 conference win.

On Saturday, April 14, the boys played away at Northeastern. Starting pitcher Travis Scarfpin was given the unfortunate task of facing Northeastern’s slugging lineup. Northeastern hit two home runs as they defeated the Bulldogs 16–1.

After a rainout on Tuesday, the team faced Troy Christian at home. With the whole team in a slump, the Bulldogs failed to score, losing 15–0.

The day after the boys played away at Dayton Christian, where fielding errors caused them to go down big in the first two innings. Ultimately the boys went home after five innings, losing 12–0. Donnie Isenbarger pitched well, but couldn’t make it out of the third inning due to a high pitch count.

Playing a doubleheader on Saturday, the boys started with an 11 a.m. game against Middletown Christian. Shorthanded once again, the boys were shut out as they fell to Middletown, 9–0. They then drove to Dayton Christian’s field where they played Troy Christian. The team played well, but gave up 20 first inning runs, eventually falling 24–5.

The Yellow Springs Bulldog softball team played Dayton Christian in two home and away games last week and, despite having leads in both games and banging out 42 hits and scoring 36 runs in the two games, it wasn’t enough, as they came up short in both games by scores of 22–20 and 21–15. Yellow Springs Coach Jimmy DeLong was nonetheless impressed with the showing.

“Our girls came out ready to play and battled with a team that I believe is the best team in the League,” he said.

Offense wasn’t a problem for the Bulldogs in either game. In the first game, the team took 9–6 and 12–8 leads behind the bats of Gracie Price and Brielle Willis.  Price and Willis combined for eight hits and 10 RBIs and they scored nine runs.  The Bulldogs lead didn’t last long as they fell behind with a score of 22–16, but in the last inning they rallied for four runs and had the tying runs on second and third when the game ended. Senior leadoff hitter Kadie Lafferty also had a productive day at the plate, with four hits and showed off her speed on the base path with five stolen bases.

In the second game, the Bulldogs jumped out to an 8–2 lead entering the fourth inning, but could not hold the lead and they fell behind by a score of 14–8.  The team rallied to within two runs at 14–12, but Dayton Christian pulled away for the 21–15 win. Once again, the Bulldogs had plenty of offense. Offensive star for the Bulldogs in the second game was Kelsie Lemons, with four hits and 2 RBIs. Gracie Price, Brielle Willis, Ashlyne Griffis and Kallyn Buckenmyer all had three hits apiece.

“’Never give up’ is the motto of our team,” said Coach DeLong. “I was proud of our team for battling back after losing the lead.  This team never gives up.”

Last week the YSHS Bulldogs competed at the 3rd Annual Greene County Invitational, which featured athletes from each high school in Greene County. Prior to the construction of Yellow Springs High School, then John Bryan High School, the team competed in the now defunct Greene County League. The competition this year took place at the new track at Doug Adams Stadium in Xenia.

Senior Amani Wagner once again led the Bulldogs with two second-place finishes; in the discus and shotput. Fellow senior Jasmine Davidson once again showed that the YSHS girls’ team has the best shot put tandem in the area with her third-place finish. Ninth grader Haneefah Jones, undaunted by the stiff competition, placed third in long jump with a personal best effort, followed up by a fifth place in the high jump. Senior Ayanna Madison was our leader in the sprints with a sixth place in the 100 meters, eighth place in the 200 meters and anchor of the sixth-place 400 meter relay team that consisted additionally of Lydia Fleetham, Haneefah Jones, and Amani Wagner. Olivia Mitchell showed confidence in the discus with a great heave. As a team the girls ended in seventh place with Beavercreek winning the girl’s portion of the meet.

On the boys side, junior Mark Bricker placed in all three of the events in which he competed. His fifth-place finish in the 1600 meters tied his personal best and he was a part of two relays that earned ribbons. The 3200 relay team of Raven Campbell, Zach Lugo, Jakob Lara-Woodburn and Mark Bricker ran a season best time and finished in fifth place. The 1600 meter relay team closed out the scoring with an eighth place effort, the tandem of Raven Campbell, Finn Bledsoe, Jay Millman and Bricker ran impressively.  Ninth-grader Ibi Chappelle ran and competed with confidence with the best leap of his life in the long jump which earned him sixth place that was matched by the same finish in the 200 meters. The all ninth grade 4 x 200 relay team of Liam Hackett, Gideon Nazari, Griffin Roberts and Michael Vickers ran to a fifth-place result against top flight competition. The leadership of Lugo was in full display as he achieved a personal best time in the 3200 meter run and a seventh-place finish. Harper Mesure continues to improve with each meet as he competed in the 200 meters and shotput. The boys finished in eighth place with Beavercreek crowned the champion.

The Bulldogs will compete as a split quad this week with the majority of the team going to the Mechanicsburg Relays and several athletes competing at the top invitational of the year, the Wayne High School Invitational.

YSHS tennis season is underway.  While the weather has been challenging, the team has made the best of its circumstances.  Each player, many of them new to tennis and new to the varsity lineup, has demonstrated a willingness to learn and is very coachable and positive. This attitude bodes well for a fun season, with high expectations for personal development and growth. Highlights from the season so far include four wins from the #1 singles player, Forrest Rowe vs. Beavercreek, Valley View, Urbana and Springfield Catholic Central.Tyler Linkhart and Ian Sherk won their singles matches against conference opponent, Dayton Christian. Captain Peter Day and Tyler Linkhart won their doubles match vs. Springfield.  The first team  win came last week against Springfield Catholic Central, with Forrest Rowe championing the cause.