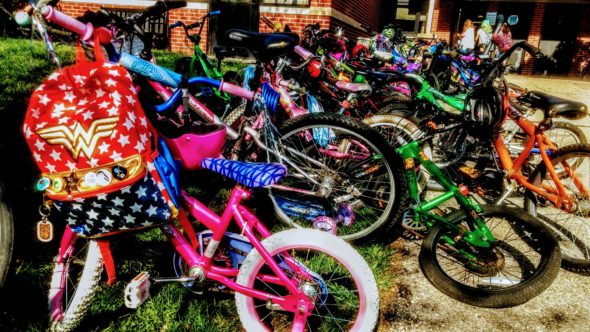 Bikes lined the sidewalks at Mills Lawn on May 9 for Bike to School Day, when Mayor Pam Conine made a proclamation in honor of the late Tracy Logan.

Last Wednesday, May 9, Mills Lawn Elementary School held its annual Bike to School Day event. According to event organizer Christopher Bongorno on the event’s Facebook page, 70 percent of students biked or walked to school on the late-start day. Healthy snacks, provided by Trader Joe’s, and water were provided — as well as coffee for adults hoping to keep up with the kids’ boundless energy. Representatives from Black Pug Bikes were on hand to give bicycle tune-ups, and kids answered trivia questions about bike safety to win prizes.

The highlight of the morning, however, was a special proclamation from Mayor Pam Conine, honoring the late Tracy Logan for his tireless devotion to bikes and bike travel and the work he did throughout his life to make Yellow Springs a more bike-able village. Logan died in February of this year at 84.

Said Mayor Conine in her address:

“[Logan] believed cars were harmful to the environment and world peace and he almost never rode in cars. For him, a car was for a medical emergency or for carrying a canoe. … He researched proper construction of bike paths, he helped make bike racks that don’t wreck your tires. He put together and maintained a set of community bikes you could hop on where you found them and ride them until you got off. He led regular Sunday bike trips for families, and Wednesdays for seniors. He mapped out 15 different bike trips you could take around Yellow Springs. And in fact, according to his daughter, Amy, Tracy was the first to put a milk crate on the back of his bike.

“And with all this, he may best be known by your parents, grandparents, uncles, aunts for the free bike clinic that he ran on Saturdays so that you could learn to fix your own bike. Tracy would tell you, step-by-step, how to fix your bike — but he would never do it for you. He did all this as long as he was able.”

Mayor Conine declared the day “Tracy H. Logan Jr. Walk and Bike to School Day,” amid applause from the crowd.

Click below for a video of the proclamation. Check out the May 17 issue of the YS News for photos of the event.