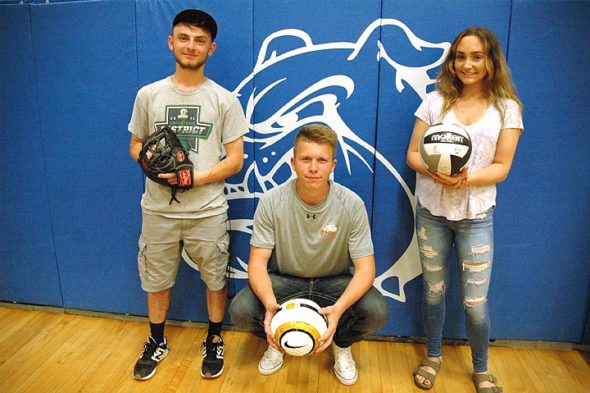 The three Yellow Springs High School athletes, headed to college next year in their respective sports, were celebrated at a signing ceremony at YSHS on Monday.

YSHS Athletic Director Nate Baker wrote in a statement that the district was proud of the three athletes for making the transition from high school to collegiate athletics and for their efforts on their local teams.

“All three of them made major contributions to their teams and to our athletic department as a whole,” Baker wrote. “Along with being elite athletes, they have given a great example of what it means to be a great teammate and competitor. We wish them the best of luck in their college careers.”

Kegley only started playing volleyball in eighth grade but learned quickly, going on to become YSHS’s libero, a defensive specialist known to dive all over the court.

Kegley said she enjoys the sport because it is competitive and can be suspenseful.

“There are these breathtaking moments, so many plays where you don’t know if you’re going to get to the ball,” she said.

Kegley chose Clark State in Springfield because it was close to home, had a solid nursing program and was where her mom went, she said. Plus, they have a successful volleyball program and Kegley connected immediately with the coach, she said.

Many highlights stand out from Kegley’s high school volleyball career — the back-to-back Metro Conference Buckeye Championships in her sophomore and junior years; her senior year victory over Division I rival Fairborn, and last fall’s Senior Night, when she accomplished a milestone not many volleyball players reach.

Lewis is the latest YSHS soccer player to move on to college ball in a program that has sent several players to college teams in recent years. The 6’4’’ defensive midfield and right defender led the conference last year in both goals and assists.

Local youth soccer leagues helped him develop into the strong player he is today, Lewis said, and is one reason for the YSHS soccer program’s success. The lack of a football team is another reason, he offered.

“It helps we don’t have a football team because we are pushed towards soccer,” Lewis said.

Lewis was recruited by Ohio Northern in Ada, Ohio, a Division III School, while playing club soccer. Already familiar with Ohio Northern because both his parents went there, Lewis was charmed during a campus visit, and chose it despite competing offers from Wooster, Wilmington and two Indiana schools.

“I like their campus, they have a well-known soccer program, a nice stadium, nice fields and a nice facility,” Lewis said.

Lewis received partial athletic and academic scholarships, according to Baker. He plans to double major in biology and business and enroll in veterinary school after his undergrad.

The team’s win his junior year against perennial rival Dayton Christian in the district finals was the highlight of his high school soccer career, he said.

While preferring shortstop and second base, Isenbarger has spent most of his senior year season behind home plate as catcher. It’s what makes him a “utility player,” a versatile player who can play anywhere on the field, and an attractive college recruit. Still, he prefers the infield.

“I like the dirt,” Isenbarger said. “It’s boring in the outfield.”

Isenbarger was initially attracted to Clark College, a two-year college in Vancouver, Wash., outside of Portland, Ore., because he would be closer to family members who have recently moved out there. Undecided on his major, Isenbarger wants to “get his electives out of the way” before transferring to a four-year college.

On a visit to Clark College, Isenbarger immediately hit it off with the school’s baseball coach.

“The coach is a jokester,” he said. Isenbarger speculated on what the coach saw in him: “[The coach] likes to look for people who have a passion for the game, not just skill.”

Isenbarger said that although coaches have praised him for being a “student of the game” and a good fielder, he strikes out a lot.

Playing college ball is the culmination of a childhood spent dreaming of playing for the Cincinnati Reds, according to Isenbarger, adding that his first word was, in fact, “ball.”