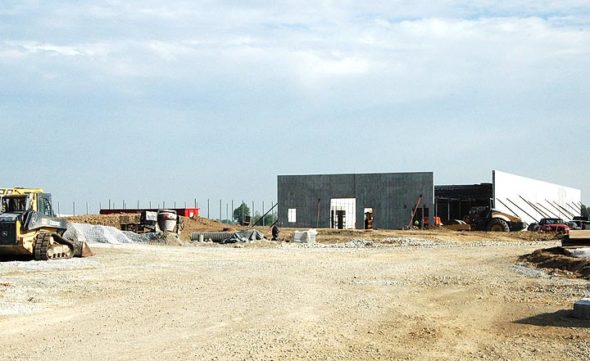 Cresco Labs is in the midst of constructing a 50,000-square-foot marijuana cultivation facility in the village and hopes to pass a state inspection in July. The company is waiting for the state to decide on a processing application. (Photo by Megan Bachman)

Two announcements this week from the State of Ohio affected the local medical marijuana picture.

A dispensary that had applied to open at 115 Brookside Drive, the former site of Community Physicians of Yellow Springs, was denied. Instead, the one dispensary that will serve the tri-county area that includes Greene, Madison and Fayette counties will be in Beavercreek, at 4370 Tonawanda Trail, if it passes later state inspections and complies with other regulations.

Mother Grows Best of Dublin, Ohio, had applied for the dispensary license in Yellow Springs, one of eight firms that applied in the tri-county. Sixty dispensaries were granted provisional licenses statewide this week out of 370 received, according to the state’s Medical Marijuana Control Program.

In a related announcement, medical marijuana will not be available by September 8, which had been the program’s effective date, according to the Ohio Department of Commerce this week. The delay in licensing the state’s 25 marijuana growers is pushing back the start date.

Before the growers can begin planting cannabis, they must have their facilities inspected and receive a certificate of operation, the medical marijuana rules state. Since no grower has so far been approved, it is unlikely any medical marijuana will be available by Sept. 8, according to the Ohio Department of Commerce.

Cresco Labs in Yellow Springs is set to have its facility inspected the second week of July, according to CEO Charlie Bachtell in an article published in the Cincinnati Enquirer this week. If it passes the test, the plants could be ready for harvest in about 90 days, so Cresco could begin selling its product in October, according to Bachtell.

Poor weather had slowed Cresco’s progress on its $6.3 million, 50,000-square-foot facility, company representatives told the News last month. But construction is now “moving full steam ahead,” they said. Cresco is still waiting, however, on an application to process marijuana into oils, tinctures, patches and edibles onsite.

Read more about Cresco’s plans and the local medical practitioners that will and won’t be recommending marijuana to qualifying patients: https://ysnews.com/news/2018/05/cresco-labs-facility-taking-shape