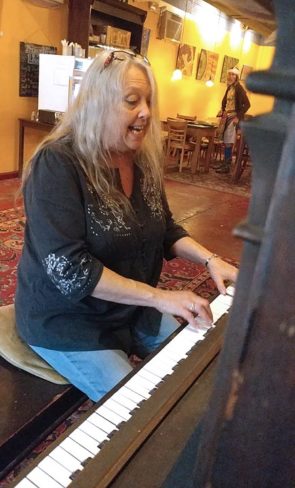 Sharon Lane, an organizer of this weekend’s Fancy Fest music festival just outside of Yellow Springs, played a blues number in the Emporium this week. Lane, a singer-songwriter, is also one of the event’s featured performers. (Photo by Tracy Perkins-Schmittler)

The event begins Friday, Sept. 14, and lasts all day until the evening hours of Saturday, Sept. 15. A pass bought on Friday is good for Saturday, and the price includes camping. Online ticket sales have ended, and gate ticket sales are cash-only at $55 a ticket, and there are limited numbers left. Parking is also limited, so carpooling is preferred. For more information, visit their website at http://www.fancyfest.org.

The event is held in celebration of the memory of Nancy (Lloyd) Brewer, aka “Fancy Nancy,” who was a beloved music teacher noted for her love of music, education, nature, spirituality, children, and people in general, according to organizer Sharon Lane. She is described by many as one of the sweetest women they ever met, according to Lane, and FancyFest is a fundraiser to support the music program of West Carollton schools, where she taught.

In its fourth year, the festival takes place in a camping venue, with food vendors such as Bricky Barrels and Smoked BBQ. Activities for children are included, and last year organizers added an extra night and another stage when it moved to the woods, so that the performers can alternate shows.

“FancyFest is a positive gathering of people in the spirit of a woman who loved people and music. It is like a good camping trip with very positive people,” said organizer Rich Reuter.

Reuter is on the executive committee of FancyFest, and his duties also include that of sound man, the coordinator of entertainment, and some webmastering of the festival’s online site. At the first year of the festival held at Peach’s, he was a spectator, which prompted him to hop on board and get involved.

The private property has several bungalows and a few houses, and two large tents will be set up for events. There will be workshops in the afternoons, and yoga in the mornings, a kids’ music jam, and aromatherapy.

Lane, one of the featured performers who played last year for the first time, describes FancyFest as “beautiful and fantastical,” and “a warm, cozy, good bunch of people.”

Lane is a singer-songwriter whose music is described by jazz musicians as “rock ‘n roll blues,” but by blues artists as “rock ‘n roll jazz,” which humorously denotes the fusion of the two styles in her music, she said. In addition to her own compositions, she will be playing some Tom Petty covers, including his song “Southern Accents,” which she appreciates because as a native of Hazzard, Ky., she believes Petty wrote about her people in a positive light that destroys negative stereotypes.

At Canal Street Tavern back in the day, she opened for locally and nationally known legends such as Taj Mahal, John Hammond, Jr., Koko Taylor, and Brownie McGhee. Mic Montgomery, the late owner of the former Canal Street, pushed her back into performing after a hiatus, she said. She hosted The Musician’s Co-op there for almost nine years.

Lucas Brewer, the surviving husband of the late Nancy Brewer, is described as being as kind and gentle as his late wife.

“So glad for his [Brewer’s] generosity and kindness to us, and his love for his wife,” said Lane.

Reuter will be playing with Tod Weidner, a singer-songwriter who is in the band called Shrug, an indie and classic rock-style group, and is also the WYSO 91.3 FM Radio host of  The Jewel Case. Reuter will also be performing with Arrows of Neon, a Grateful Dead cover band, and with Captain Contagious and the Burning Sensations, a classic rock-style band who will be doing the late-night super jam.

A number of the people who come to the songfest are musicians, and so there will be late-night campfire jams as well. Mike “Disco Man” Shalloe will be the master of ceremonies for the stage. Other musical performers will include Grover, Salvadore Ross, Zoo Trippin’, Willy Clark, Eyeris Wide, Nasty Bingo, Home Sown, A Sides/B Sides, Country Provisions, Biscuits & Gravy, Milk & Honey, and Iycen.

Reuter summed up the FancyFest experience: “It’s a great communal gathering that celebrates music, family, and friendship, which all honor the memory of Nancy,” he said.

The participants are all planning to have so much fun, he said, adding that everyone pitches in — they bring in food and coffee, and there is always plenty to eat sitting out on tables.

*The author is a local musician and writer.