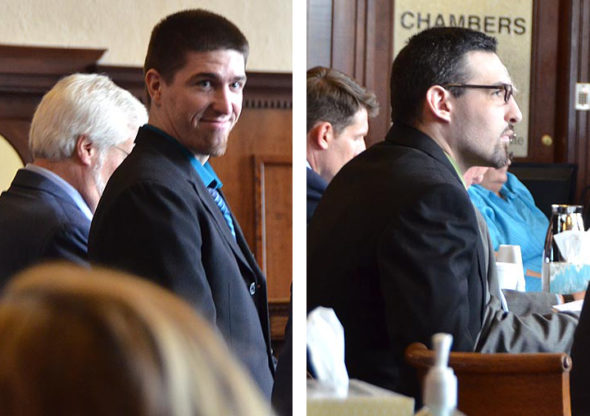 Dustin Merrick, 27, and Bret Merrick, 25, were in court Wednesday, Sept. 12, as part of their plea deals in the shooting deaths early last year of local residents William "Skip" Brown and Sherri Mendenhall. (Photos by Carol Simmons)

In a move that allows them to avoid the death penalty, the two defendants accused in the homicides early last year of local residents William “Skip” Brown and Sherry Mendenhall were in court Wednesday morning, Sept. 12, to accept a plea deal.

Brothers Dustin Merrick, 27, and Bret Merrick, 25, of Xenia, had faced a charge of aggravated murder in the Jan. 15, 2017, shooting deaths of Brown, 44, and Mendenhall, 63, who lived in neighboring apartments in the the 4000 block of East Enon Road, Miami Township.

Bret Merrick pleaded guilty to two counts of involuntary manslaughter and waived his right to trial in the case, with a maximum possible sentence of 25 years, including three years for firearms use.

Dustin Merrick pleaded guilty to nine counts, including two counts of aggravated murder and two counts of murder. The minimum sentence will be life in prison without the possibility of parole.

The deal came the second week of jury selection in the trial of Dustin Merrick. Members of the Brown and Mendenhall families were in attendandce for the hearing.

Larry Brown, father of Skip Brown, said that a representative of the victim’s advocate office had informed him Monday afternoon that the brothers would have a plea hearing Wednesday morning, and sentencing would take place Wednesday afternoon, both in Judge Michael Buckwalter’s court.

According to Brown’s understanding, “the defense proposed a plea [deal] last week, and the prosecutor’s office had some requirements that had to be worked out.”

The brothers have connections to the Brown family. The young men’s mother was married to Skip Brown’s brother, David Brown, at the time of the shootings, and Dustin Merrick had previously worked with Skip at his Yellow Springs-based roofing business.

Concerning the possibility of the death sentence, Larry Brown said he had been “okay with it.”

“But nothing will bring Skip back,” he added.

For Larry Brown, a plea deal means that “the boys are finally accepting responsibility.”

Larry Brown said he also was told that the plea hearing would bring out more details about the homicides, and that prosecutors would meet with family members after the sentencing to answer any questions they may still have.

The News will continue to follow the story with updates online and in next week’s paper.