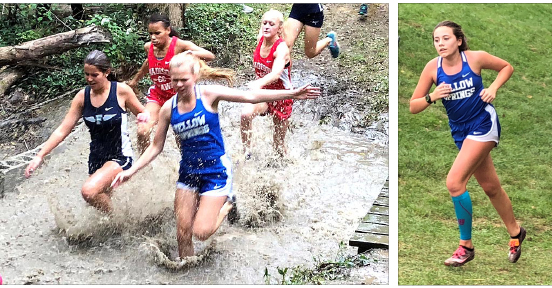 The coaches were very pleased with the performances, as most of the athletes improved their season-best times despite the difficult course.

According to Assistant Coach John Gudgel, this boys team will be a serious contender for the Metro Buckeye Conference title at the end of the season.

High school senior Zach Lugo broke the 19-minute barrier with a time of 18:58.4 and led the boys team to a ninth-place finish. Senior Mark Bricker is recovering from an injury at the start of the season and demonstrated, with a time of 19:45.5, that he is getting back in shape. Head coach Isabelle Dierauer is expecting him to drop his time significantly over the next couple of races.

The YSHS varsity volleyball team is in the middle of the season, with conference play in full swing. The team started off a busy two weeks on Sept. 13, traveling to Dayton Christian. Playing with a new lineup the Bulldogs dropped one set in the match but were able to come away with a victory, winning 25–11, 25–14, 19–25, 25–14.

Emma Ronnebaum led the team with 13 kills, six aces, three blocks, 20 digs and 17 assists. Stepping in to help set was Emma’s sister, Alex, also with 13 kills and six aces. She also added five assists, nine blocks and 12 digs. Tyler Linkhart contributed 10 kills, 12 assists, two blocks and eight digs in just the one set she played. Angelina Smith, Annlyn Foster, and Aaliyah Longshaw each had four kills with Smith and Foster each putting up one block each. Longshaw also had 11 aces for the match while Olivia Snoddy had three kills and 10 digs.

On the following Monday, Sept. 17, the Bulldogs played a non-conference match against Chaminade Julienne. Having lost a close match last year against CJ, the Bulldogs were out for revenge.

The fourth set was a treat for the fans, as the game was tight from the beginning, with neither team allowing more than two points to be scored during any given rally. Finally, at the 15–15 mark, the Bulldogs started pulling away with some timely blocks by Alex Ronnebaum (15 blocks, 13 kills, six aces, 19 digs) and some fantastic digs by Smith (25 digs, five blocks, two aces, two assists). With the Bulldogs up 18–15, they had momentum on their side. At the 22–19 mark, the Eagles gave one last effort and tied the game at 22–22. Yellow Springs sided out but CJ wouldn’t give up. After several exchanges of points, with the score tied at 24–24, Alex went back to serve up an ace on game point, winning the set 26–24. It was an exciting game for the Bulldogs and a great effort by both teams.

The next day, Sept. 18, Yellow Springs hosted conference rival Troy Christian. Still fired up from the win the night before, the Bulldogs took control early in all of the sets and never looked back, winning the match in just three sets, 25–16, 25–15, 25–12. One highlight of the night was Linkhart’s diving dig up to the right-side hitter, who immediately set Linkhart. Linkhart didn’t have time to get up, so, rising up on her knees, she attacked the ball which landed in front of the Troy Christian’s libero for a kill. Linkhart ended the night with 13 kills, four aces, 10 assists, one block and 27 digs. Emma Ronnebaum contributed 13 kills, one ace, nine assists, four blocks and seven digs, while Alex Ronnebaum added seven kills, three aces, two assists, five blocks and 13 digs. Smith and Longshaw put down three kills each, with Smith putting up three blocks and Longshaw digging up three balls and serving up three aces. Foster also had one block and four digs and Snoddy had three digs to seal the win.

On Thursday, Sept. 20, the Bulldogs traveled to Legacy Christian to take on the Knights for round two. The Bulldogs were on a roll last week and swept the Knights in three straight sets 25–21, 25–14, 25–12. Big blocks by Yellow Springs kept the Knights from any control in the game. Even though the Bulldogs had more serving errors than any other match, they still were able to score 18 aces overall and walk away with 11 blocks. Alex Ronnebaum had another big night blocking (8 blocks, 8 kills, 4 aces, 12 digs) and sister Emma, also had eight kills, one ace, 13 assists and four digs. Linkhart started off a little slow in the first set, then poured it on for a total of 12 kills, two aces, 10 assists, two blocks and six digs. Smith put down three kills, two aces, one block and had 11 digs. Snoddy and Longshaw each had five digs and three aces. Foster had two amazing kills down the line while digging up two hits by the Knights.

The Bulldogs are now 11–1 and 8-0 in the Metro Buckeye Conference. The team will host Emmanuel Christian on Thursday, Sept. 27, for the conference title.