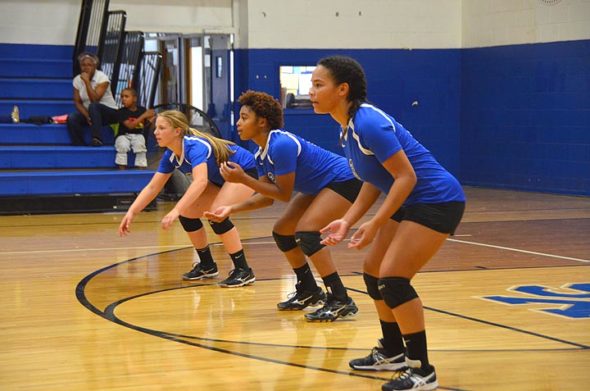 Although school was closed last Monday for the Labor Day holiday, the high school gymnasium was bouncing as the varsity and junior varsity volleyball teams showed up for a morning practice.

With a big conference game scheduled the next evening against Emmanuel Christian Academy, who like the Yellow Springs Bulldogs were going into the game undefeated in conference play, the local team was hoping to hang on to its no-loss standing.

Boasting a 5–0 record overall, and 3–0 in the Metro Buckeye Conference, the Bulldogs wanted to keep their momentum going.

And coach Christine Linkhart, in her 10th year with Yellow Springs, wasn’t letting her athletes take things easy just because it was a holiday.

“Wouldn’t you rather have pressure in practice, than pressure in the game?” she asked the girls, adding push-ups to a serving drill after each missed play.

The varsity roster is small, with only seven players. The same number make up the junior team.

Games are played with six players on the court at one time, three in the front and three in the back. And each player has a specific role: i.e., hitter, setter, blocker — all describing ways of interacting with the 9.2–9.9-pound leather ball.

Every player is essential, especially with such a small team, Linkhart said.

So when junior Emma Ronnebaum, a setter, shared that she was having hand pain at the ball of her left thumb, the coach was worried.

Athletic trainer Ashley Torbeck gave Emma’s hand a look and gave her some ice for the swelling. Torbeck told Linkhart that her player appeared to have a broken blood vessel. Despite the injury, Emma returned to drills, trying to avoid direct contact with the ball and the affected hand, and grimacing each time she failed.

Linkhart said she hoped the team wouldn’t have to consider playing without Emma the next night.

In addition to being small in number, the varsity team is relatively young as well, with but one senior, two juniors, two sophomores and two freshmen.

Given the team’s winning record, earning a place on the varsity roster might appear to be keenly competitive. That’s not the case, however, Linkhart said.

Tryouts early in August help the coach see “who’s varsity and who’s JV, but most everyone makes a team,” she said.

The players practice every day after school and most weekends.

Alex described their role as “kind of like the glue” that connects the team.

“A lot of people think we’re running the whole show, but we’re not. We’re all part of the team,” she said.

Tyler likened their leadership position to an “information booth” for working together as a team.

As much, or perhaps more, than any other team sport, volleyball is not an individual’s game. That’s true not only in play, but also in practice, as there are limited ways a volleyball player can train without playing with others, the co-captains agreed.

Tyler, who’s been playing the game since fourth grade at St. Brigid school, said her favorite aspect of volleyball is “the energy that everyone gives to it — and when you get that good ball.”

For Alex, who began playing with a YMCA recreational team when she was 6, “the strategy behind it” is the most satisfying aspect of the game.

“You have to be mentally tough.”

Tyler agreed that the mind plays an important role in the game.

Filling out the team, in addition to Tyler and the Ronnebaum sisters, are: Annlyn Foster, Aaliyah Longshaw, Olivia Snoddy and Angelina Smith.

On Labor Day, observing practice from court side, Linkhart said she was watching for “their effort, and how they’re talking to each other.”

Also present were the team’s assistant coaches — “nearly as many as the team,” Linkhart said — Margaret Swanson, who is also lead coach for the JV squad; Billy Stewart, who coached varsity before Linkhart arrived; Tracy Clark; and Jay Hale.

Winning isn’t new to the Bulldogs volleyball team. The squad was Metro Buckeye League champs in 2015 and ‘16, and they took second place in the conference last year — after first-place Emmanuel Christian, Tuesday night’s opponent.

The Springfield team has finished first or second in league play since 2009.

Recent game statistics, according to information submitted to the News by coach Linkhart, included a three-set away-game win Aug. 27 against the Legacy Christian Knights and another three-set triumph Aug. 30 at home against the Middletown Christian Eagles.

Against Legacy Christian, Annlyn Foster led Yellow Springs with 11 aces, 8 digs and 3 assists, while Emma Ronnebaum added 5 aces, 5 kills, 6 assists, 1 block and 6 digs. She was followed by Tyler Linkhart with 4 aces, 10 kills, 10 assists, 2 blocks and 12 digs. Olivia Snoddy and Angelina Smith both added 3 aces each with Snoddy contributing 4 digs and Smith with 1 kill, 1 block, 8 digs. Alex Ronnebaum put down 1 ace, 5 kills, 3 blocks and had 3 digs. Aaliyah Longshaw put down 2 kills and had 1 assist along with 6 digs. Freshman Ava Schell also helped with the win with 3 digs in her varsity debut.

At home, Aug. 30, Emma Ronnebaum had 10 of the evening’s 27 total aces along with 5 kills, 7 assists, 1 block and 12 digs. Missing one of the regular setters, Bulldogs senior Alex Ronnebuam stepped up to help with 4 assists, 2 aces, 12 kills, 4 blocks and 13 digs. Annlyn Foster, once again, showed her strong serving skills with 5 aces, 4 kills, 9 digs, and 2 blocks, while Angelina Smith was close behind with 4 aces, 1 kill, 1 assist and 5 digs. Aaliyah Longshaw contributed with 3 aces, 6 kills, 1 assist, 2 blocks and 7 digs. Olivia Snoddy added 2 aces, 2 kills, 1 assist and 3 digs and sophomore setter Aterrys Wagner aided the win with 1 ace, 1 dig and 4 assists.

Emma Ronnebaum was at her position, her hand wrapped tightly with protective padding. The score went back and forth, with the teams playing all five possible sets, until Yellow Springs prevailed.

Over 40 runners, 32 from the Yellow Springs High School and McKinney Middle School boys and girls cross country teams, participated in the second annual Bulldog Fun Run. The two-mile race was held in hot and humid conditions.

The overall winner of the Fun Run was YSHS alumnus and YS teacher David Johnston.

A new feature this year was the one-mile Bulldog Chase that featured 15 Mills Lawn Elementary runners. Astryd Martinson was first among the girls with Kyle Johnston duplicating his father’s performance with a first place in the boys portion of the race.

This year, Isabelle Dierauer is the head coach, with John Gudgel and Peter Dierauer serving as assistant coaches.

Under the lights at YSHS on Thursday, Aug. 30, the girls varsity soccer team started out strong against out-of-conference Dixie Greyhounds with several shots on goal, including a penalty kick by junior Tyler Linkhart. None of the shots made their way into the goal, however, and the girls headed into halftime down 2–0.

Behind the speed and energy of freshman Myrah Burton, the Bulldogs once again came to life in the second half. Haneefah Jones continues to establish herself on the defensive end, chasing down attackers and turning the ball upfield. Despite the renewed efforts, the Bulldogs fell to Dixie with a score of 4–0.