On Monday, Oct. 8, Cresco Labs of Yellow Springs opened its doors to local media and public officials for a ribbon-cutting ceremony and facility tour of the medical marijuana grower. 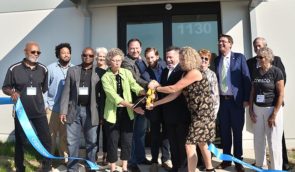 Inside the facility, cultivation agents tended 300 cannabis seedlings planted three weeks ago after Cresco received its certificate of operation by the State of Ohio. The first crop of cannabis will be processed and available at dispensaries in early January to patients with one of 21 qualifying medical conditions, according to Cresco.

Present were elected officials and employees of the Village of Yellow Springs, Yellow Springs schools and Miami Township along with State Rep. Rick Perales (R–Beavercreek), and other local supporters.

In a press conference, Karen Wintrow of the Yellow Springs Chamber of Commerce reflected on the process of vetting Cresco, which she said is a “right fit for Yellow Springs.”

“The community recognized what a treasure Cresco would be,” Wintrow said.

The Village sold Cresco land at the Center for Business and Education on the western edge of town in June 2017. Following Cresco’s approval last November as one of 12 large-scale medical marijuana growers in Ohio, they began construction on the 50,000-square-foot facility. The building was finished this summer.

Cresco CEO Charlie Bachtell said at the press conference that Cresco’s opening is a significant moment that will benefit many different constituencies.

Bachtell also expressed gratitude for the community’s support, calling the relationship “remarkable.” He said he hopes that medical marijuana can alleviate Ohio’s opioid crisis. And in a statement, Bachtell said he looks forward to “helping eliminate the age-old stigma associated with marijuana — we want it to just be called medicine.”

Cresco plans to continue expanding as the state allows, Bachtell said in a later interview. Currently, the facility has 25,000 square feet of hybrid greenhouse space, which could increase to 75,000 square feet in a few years.

Additional processing space may also be needed. While Cresco was not one of the 11 medical marijuana companies to initially receive a processing license, the company recently responded to the state’s request for more information on its application and is hopeful the processing license will soon come through. The company plans to sell its products as flowers, edibles, vape pens/cartridges, oral sprays, pills and patches.

According to Bachtell, Cresco currently employs 14 people in the local facility. Cultivation agent Jerico Castillo, who brings more than 20 years of experience working with plants to the job, said he prunes leaves and manages the plants’ nutrients and water intake. Each plant consumes about one gallon of water per day, he added.

Among the 30 strains Cresco is now growing are Gorilla Glue #4, Pineapple Express, Snow Lotus, Clementine and Yellow Springs Kush, a strain cloned specifically for the facility, according to growers.