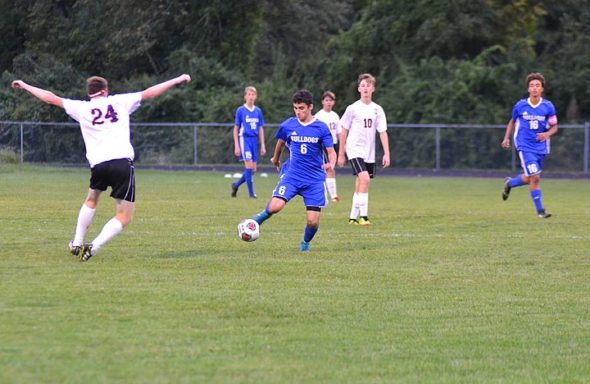 YSHS forward Kaden Bryan stole the ball from an Emmanuel Christian player on the way to a breakaway goal against the visitors during the YSHS’s 15–1 win at home on Sept. 27. Bryan leads the team this year in goals and assists, with 14 apiece. (Photo by Megan Bachman)

Undefeated in the MBC, YSHS is conference champion

After clinching a share of the Metro Buckeye Conference title last week, the YSHS varsity volleyball team traveled to Jefferson Township on Wednesday, Oct. 3, to win the title outright.

With only two conference matches left in the season, the Bulldogs needed to win at least one to call the title their own — and the Bulldogs delivered. Winning the match handily (25–12, 25–7, 25–1), the Bulldogs once again became conference champions.

Every player on the Bulldog roster played, making the victory a team effort. Tyler Linkhart led the team by serving 19 straight points in the third set, of which 13 were aces. She ended the night with a total of 21 aces, 11 kills, 13 assists and four digs. Emma Ronnebaum and Aaliyah Longshaw each added five kills, with Emma also putting up seven assists. Serving was the name of the game as Angelina Smith put down six aces, along with three kills, Annlyn Foster had five aces, Alex Ronnebaum had four aces and Ava Schell had two aces. Olivia Snoddy had one kill and Ateerys Wagner put up two assists.

In their final conference match of the season, YSHS hosted Dayton Christian. The Bulldogs were out to stay undefeated in conference play. They came into the game well prepared, winning the match in three sets, 25–12, 25–11, 25–18.

With two matches left in the regular season, YSHS hosted Division I Fairborn on Monday, Oct. 8. After the exciting conference matches, the Bulldogs didn’t show as much energy against the Skyhawks but still managed to get the job done in three sets, 25–19, 25–18, 25–16.

This past week, the McKinney eighth-grade volleyball team hit its stride, winning in a three-set nail-biter against Edwin J. Brown. The Bulldogs showed real tenacity as they came from behind late in the third set to win.

Corinne Totty continued her domination at the net, calmly spiking the ball to the ground while both Vivi Bryan and Hailey Roe played steady and effective defense.

Against Dayton Christian, the Bulldogs came to play, winning in two sets. Alyssa Worley started the first set off with 13 straight serves as the Bulldogs took a commanding lead they would not relinquish. In the second set, Worley again came ready to serve for points, as did Captain Josephine Zinger. When not dominating the serving game, there were key performances by Zinger and, again at the net, Totty.

The eighth-grade team has built up momentum to carry them into their final games this week as they look forward to the MBC tournament Saturday, Oct. 13.

Two games, two different stories. On Thursday, Oct. 4, the YSHS girls soccer team traveled to Springfield. The Bulldogs, with only one player available to substitute, were no match for the speed and depth of the Wildcats, falling by a score of 10–0.

Then on Saturday, Oct. 6, the Bulldogs traveled to Columbus to take on the Bruins of Briggs. This time, still with only one player available to substitute, the Bulldogs matched the intensity of their opponent and outplayed them.

Leading 2–0 at halftime, the Bulldogs then went on an offensive tear. Junior Tyler Linkhart came away with a hat trick, becoming the Bulldogs’ second-leading scorer in just one game. Freshman Aaliyah Longshaw added two goals, one of which was a beautiful finish from Linkhart’s corner kick. Freshman Alyss Nichols capped the game off with a goal, solidifying her place as the Bulldogs’ leading scorer.

The team finishes its season this week with two home games, Tuesday, Oct. 9, against Dayton Christian, and Thursday, Oct. 11 against Newton. Thursday’s game is Senior Night and the final home game of the season.

According to the Metro Buckeye conference website, the YSHS boys varsity soccer team went 2–1 over the week. They beat Catholic Central and Fairborn both by a score of 4–0, but lost to Greenon, 5–1. As a team they are now third in the conference. The team’s leading scorer is Kaden Bryan.

On Saturday, Oct. 6, the Bulldog cross-country team competed at the Legacy Christian Ambassador Invitational in Xenia.

On this long, hilly course Cheyan Sundell-Turner once more kept up with the top Division 1 runners and placed fifth in a time of 13:50 in the two-mile middle school girls race. Sundell-Turner will be the defending MBC league champion this coming Friday at the Metro Buckeye Conference championships.

According to assistant coach Peter Dierauer, the McKinney boys team is a strong contender for the team trophy at the upcoming MBC conference.

YSHS runner Mark Bricker has recovered well from his injury and is getting in shape just in time for the upcoming season finale. He placed 28th in a time of 20:41 just before Zach Lugo’s 34th place in 20:55. According to head coach Isabelle Dierauer, these are remarkable times considering the tough 5k course and the peaking practices of the past week.

“All Bulldog teams are well-conditioned and ready for the upcoming conference home meet at Young’s and the district meets,” Dierauer said.