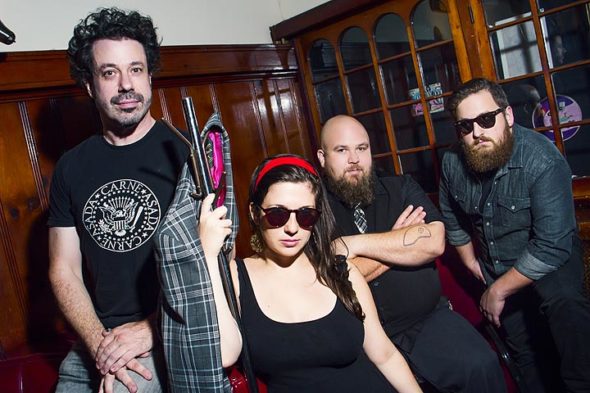 A blues-rock fusion—Claudettes to jazz up Emporium

The Chicago four-piece band the Claudettes are returning once again to play at The Emporium this Friday, and they couldn’t be happier.

‘It’s a great group of people there. Always a lot of musicians there, always such a fun time,” says Johnny Iguana, pianist and songwriter for the band.

Floating above are Berit Ulseth’s silky lead vocals, a recent addition to the band. Their first album was instrumental, their second featured Yana, a chanteuse singing in French, who has since left the group.

Ulseth had been singing backup in a country band along with drummer Caskey, who recognized a unique quality to her voice and invited her to meet the rest of the band.

The quartet recorded an “unplugged” album live in Iguana’s piano room in 2017, released a studio album “Dance Scandal at the Gymnasium!” in March of this year, and just recently finished recording their next album in Chicago with producer Ted Hutt.

A founding member of Flogging Molly, Hutt now concentrates on producing bands such as Dropkick Murphys and Gaslight Anthem, and won a Best Folk Album Grammy for his production of Old Crow Medicine Show’s “Remedy.”

“A lot of really successful stuff,” says Iguana of Hutt. “A lot of it really resides on the punkier fringes of roots music, which is why it was such a good match for us to work with him.”

The new album is being prepared for release in early 2019, and they’ll be playing quite a few of the new songs at the Emporium show.

“We mix it up during our shows and I think that makes it really entertaining and unique. There’s a lot of instrumental fireworks. It’s a cool action-packed set,” Iguana promises.

“At the Emporium we do two sets,” says Iguana. “Our usual shows are like 80 minutes, but here we’ll be doing two 60-minute sets.” The Emporium show is an unusual one for the band, which plays mainly clubs, halls and festivals.

“Playing at the wine tasting is a very unusual gig,” Iguana says. “But it’s always a really cool vibe in there.”

So what brings the band to Yellow Springs?

“Niki Dakota at WYSO was one of our first really big champions,” recalls Iguana. “She had contacted our record label and ordered 60 CDs of our first album for a pledge drive way back when.”

Dakota suggested the band contact Emporium co-owner Kurt Miyazaki about setting up a show, and it’s become a regular event every few months.

The posted showtime is 6:30 p.m. at the Emporium, and it will likely be a full house, so fans should consider showing up early.

“I much prefer to play a 7:30 or 8 o’clock show,” Iguana admits. “the main reason is I’ve been writing a wide range of songs and the lyrics are really important. Berit’s voice is so beautiful and so expressive and there’s so much emotion that it’s a drag when everyone’s just drinking and talking while you’re playing.”

In addition to their original songs, they also throw in a mix of cover songs from the ’20s through the ’70s in their own style to spice things up.

Iguana notes, “we’ll do ‘There’s No Business like Show Business’ and ‘California Here I Come’ — old Tin Pan Alley stuff — but then we do Grandmaster Flash, Neil Young, Marvin Gaye, Santo & Johnny and Link Wray and all kinds of good stuff — we just do them our own way.”