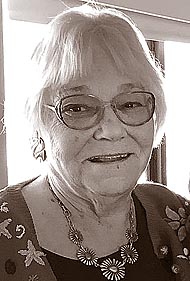 Polly Ann DeWine passed away in San Diego, Calif., on December 17, 2018. She was born June 3, 1935, in Springfield, Ohio, to Clara and Lloyd (Farmer) McNutt. The family later moved to the village of Yellow Springs, Ohio, where she and her three sisters and brother spent their teenage years.

She was preceded in death by her parents and her sisters, Nancy Welch, Sue Moeser and Judy Tropp. She is survived by her brother, Ted McNutt, and numerous nieces and nephews.

Polly earned a BA in Art Education from The Ohio State University and later a Masters degree from the University of Southern California.

She married Jerry DeWine and following his military commitment, he earned his teaching credential while Polly was teaching art. Polly relocated to California to pursue her art education. For many years, she taught at Westlake School for Girls, a private school in Beverly Hills, Calif., which later merged with Harvard School. The school’s art gallery was named in her honor and displayed some of her original art. She retired from teaching in 1994 and moved to Borrego Springs, Calif., where she became very active in the art community.

Following his retirement, Jerry joined her in Borrego Springs where they enjoyed volunteer activities and travel before his death in 2008.

Polly will be remembered as a dedicated, fabulously creative art teacher. Many young people developed a life-long appreciation of art as a result of the encouragement of Mrs. DeWine.

A Mass of Christian Burial will be held at 11 a.m., Saturday, January 5, 2019, at St. Paul’s Catholic Church, 308 Phillips St., Yellow Springs. Burial will follow services in St. Paul’s Cemetery. Condolences may be made to the family at http://www.NeeldFuneralHome.com.

A student art program is being established in Polly’s memory at the Becky DeWine school in Haiti. Contributions can be made to Hands Together, Polly DeWine Art Program, P.O. Box 80985, Springfield, MA, 01138.