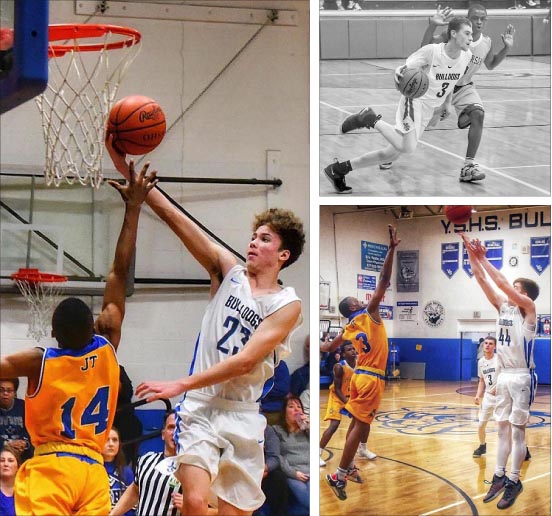 Girls varsity splits two at home
The girls basketball team lost to Troy Christian 46–39 on Thursday, Jan. 3, and then won two days later against Ansonia 50–47 on Saturday, Jan. 5. Both games were at home.

Top scorer was Angie Smith, with 31 points and nine rebounds.

Aaliyah Longshaw had seven rebounds, and Izzy Ellis played most of the game, playing well against Troy Christian’s post players.

Against Ansonia, Smith was again the leading scorer, with 36 points. She also had 12 rebounds, six steals and five assists.

Boys Bulldogs host three at home
The Eagles of Troy Christian came to town on Friday, Jan. 4. The JV Bulldogs kept it close at the half, trailing Troy Christian by only three points. But ultimately the Eagles prevailed, winning the game 39­–24. The scoring in the JV matchup was spread across many team members, including Tariq Muhammad (7 points), Kaden Bryan (5 points), Ibrahim Chappelle (4 points), and two points each scored by freshman Cameron Harris, sophomores Joseph Minde-Berman and Hunter Sparks, and senior Mateus Cussioli.

The varsity boys struggled against the Eagles, who shut down the Yellow Springs scoring and held the Bulldogs to only 22 points. Freshman Dimitri Wallace led the YS boys with 7 points, senior Kevin Wagner added 5 points and 5 rebounds, senior Trey Anderson and freshman DeAndre Cowen each contributed 4 points and senior Andrew Clark was held to only 2 points. The Bulldogs lost 45–22.

The varsity boys were led by top scorer Clark who had 14 points and 4 rebounds. Anderson led the defensive effort with 7 rebounds and also added 4 points. Cowen scored three field goals and a free throw to add another 7 points to the total, but ultimately the Bulldogs came up short, losing to the Warriors, 44–25.

The Bulldogs hosted the Jefferson Township Broncos on Friday, Jan. 10. Romel Phillips led the JV quad in scoring, with 10 points, followed by Muhammad with 9 points. Harris added 4 points, and Cussioli, Chappelle and Bryan each added a field goal. But the Bulldogs couldn’t keep up with Jefferson, who won 51–29.

The Bulldogs varsity squad played hard agains the Broncos, battling the entire game to catch up to Jefferson’s early lead. A monster scoring effort from Clark, who contributed 29 points, as well as clutch baskets by Anderson and senior Teymour Fultz gave Yellow Springs the lead with less than three minutes left in the game. The entire Bulldog squad elevated their game to bring down the Broncos, with Cowen adding 12 points and 6 rebounds. Wallace made three free throws and added four rebounds to the defensive effort. A thrilling game from start to finish brought home a victory for the Bulldogs, who hung on to win, 51–47.
—YS News Staff